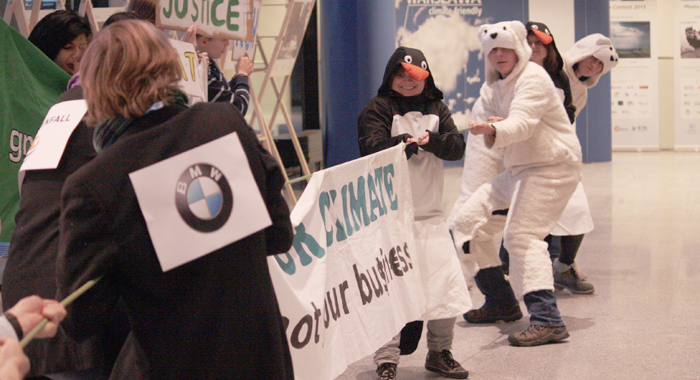 Young activists stage a mock tug-of-war at the climate talks to demonstrate the conflicting interest of big business and the environment. (IWN photo)

WARSAW, Poland — Caribbean negotiators are not only vocal but also hold key positions at the two-week global climate change talks, being held here from November 11-22.

Carbon markets is a system to help countries cut their output of climate-warming emissions by putting a price on carbon dioxide.

Hugh Sealey, who is representing Nauru — chair of the Alliance of Small-Island States (OASIS) — is vice-chair of the Clean Development Mechanism (CDM) executive Board.

OASIS comprises 43 countries from the Caribbean, Pacific and the AIMS (Africa, India and the Mediterranean) region.

Sealey’s compatriot, Derrick F.B. Oderson, is chair of the Joint Implementation Supervisory Committee (JISC), which, under the authority and guidance of the CMP, oversees the verification procedure for submitted projects to confirm that the ensuing reductions of emissions meet the relevant requirements of the Kyoto Protocol and the Joint Implementation guidelines.

“There is a story to tell here,” Sealey told the Caribbean Media Corporation (CMC) on the slidelines of the climate talks.

“Between the two of us, we are controlling the carbon markets,” he said, noting that the CDM is the largest carbon market in the world.

“It has delivered over US$315 billion in assistance to developing countries. We have had over 700 projects that we have launched since 2004. We have saved the developed countries over US$3 billion in cost in compliance,” Sealey said.

“We have helped sustainable development throughout the world,” he further told CMC, adding, “There is now a regional collaboration centre for the CDM at St. George’s University in Grenada, there is one in Lome and there is one in Kampala.

“So, I think there is a story to tell that small islanders are playing their part on the world stage,” he further said.

The climate talks are very important to the Caribbean, which is home to Haiti, the country that has suffered the most from climate-related catastrophes over the past decade, according to a report released here.

“We are being impacted by climate change now. We have to fight sea level rise, we are looking at increases in the frequency and severity of storm events. So, this is about survival of small island states,” Sealy told CMC.

“There is nothing more important right now than what’s going on here. In my humble opinion — and forgive me for being melodramatic — this is the most important decade facing mankind. What we do in the next seven years will affect generations to come,” he further said.

Sealy rejected the view that these conferences are merely talk shops for Caribbean countries.

“There is the Green Climate Fund that is now being operationalized here in Warsaw, hopefully. The developed countries are supposed to put US$100 billion a year into mitigation and adaptation for developing countries. That’s a tangible benefit for small island states,” he said.

Sealey said that his role at the conference is lead negotiator for workstream 2 on behalf of OASIS. Workstream 1 is trying to come up with a 2015 agreement that will come into effect in 2020.

“Workstream 2, which is what the Alliance of Small Island States pushed for, is that we cannot wait until 2020 for an agreement to take action now,” Sealey said.

“So we insisted that they will have to have a workstream 2 and my job here is to make sure that countries move forward in the next seven years to enhance the mitigation,” he further said.

Sealey said that OASIS is hoping to get out of workstream 2 “a technical process that identifies the mitigation potential that developing countries can take, and also the means of adaptation, the finance, the capacity building that will allow small islands to move forward.”

He said that in Grenada, where he lives, the cost of electricity is US$0.40 a kilowatt-hour, “one of the highest in the world,” adding that 10 per cent of the nation’s GDP is spent on importing diesel.

“It is a constraint on the entire economy. We have hotels that can’t pay their electricity bills. If we can get something out of this conference that says that money will pour into developing countries that will help them to transform their energy sectors, then that’s sustainable development benefit that will help the entire region.”

Sealey said that the key issues for developing countries at the climate talks is “getting that assistance, recognising that climate change is affecting us now and we need support now to not only adapt but to transform our economies. And that’s what I am interested in now.”

He noted the effects of Typhoon Haiyan, which devastated parts of the Philippines on the weekend, and claimed an estimated 10,000 lives.

“How can we adapt to that type of storm in the Caribbean? Totally impossible,” he said.

“So what the world has to do is reduce their emissions. And that is what we are trying to do here. We are trying to bring a sense of urgency to this conference that we have to do things now; not wait until 2010,” Sealy said.

Sealey’s comments came ahead of an announcement that the poorest countries at the talks have finalised a comprehensive set of plans to deal with the “inevitable impacts of climate change”.

All 48 Least Developed Countries (LDCs) which are Parties to the Untied Nations Framework Convention on Climate Change (UNFCCC) have meanwhile submitted their National Adaptation Programmes of Action to the UNFCCC secretariat.

With these plans, poor countries can better assess the immediate impacts of change, for example drought and floods, and what they need in the way of support to become more resilient to climate change impacts.

“Science clearly shows that a significant degree of climate change is unavoidable, as has been confirmed by the latest findings of the UN’s Intergovernmental Panel on Climate Change. Typhoon Haiyan has been the latest in a string of worsening extreme weather events around the world, and we know there are more to come,” UNFCCC Executive Secretary Christiana Figueres said.

“Now and in the future, the poorest and most vulnerable countries urgently require predictable finance and technology to become more resilient. Good planning is essential to empower poor countries to deal with climate change. At the same time, it is clear that the support to countries is presently inadequate and must urgently be stepped up,” she further stated.