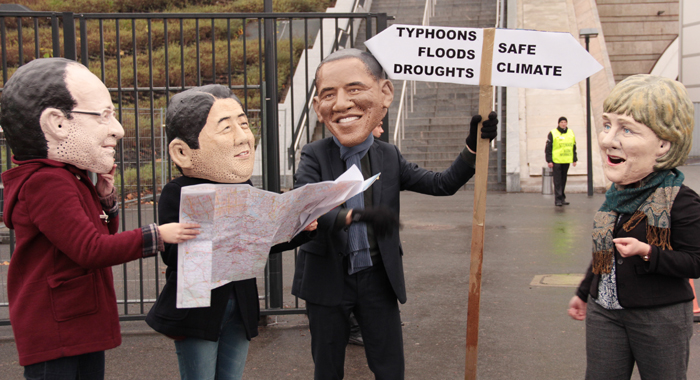 In this demonstration staged by Oxfam on Friday, Nov. 23, 2013, in Poland, caricatures of world leaders consult a climate roadmap, even as the choices are explicitly clear. Prime Minister of SVG, Ralph Gonsalves, says climate change will be a priority during his chairmanship of the Caribbean Community. (IWN photo)

WARSAW, Poland — A Caribbean negotiator said that she was managing expectations that things could change during the dying hours of the two-week world climate summit on Friday.

“My general impression is that nothing is where it should be, if they expect an ambitious outcome at this COP (Conference of Parties),” Rueanna Haynes, second secretary at Trinidad and Tobago’s Permanent Mission to the United Nations, and a negotiator at the talks, said around 4 p.m. local time.

“Before coming here, there was an attempt to manage the expectations and vulnerable countries like us in the Caribbean as well as others in African, the LDCs (Least Developed Countries), we tried to push back against that, tried to make the point that this COP is key COP in the trilogy of COPs leading up to the 2015 agreement in Paris,” she said.

This year’s COP, along with the 2014 summit in Peru, will pave the road for a final deal that Parties have agreed to sign in Paris in 2015.

“But, in spite of that, we’ve come here and there has been a series of very disappointing announcement by developed countries, which are supposed to be taking the lead in these climate change initiatives,” Haynes said.

“And, in addition to that, we see that there is just a general reluctance to truly engage in productive discussions. Countries seem to feel as if there is still enough time to continue stalling and to continue holding on to redline positions. But, it just isn’t so. So, right now, my general impression across the board is not a good one,” she further said

Asked if there was any hope at such a late stage in the talks, Haynes said, “Yes, there is always hope even with only a few hours left before six o’clock.

“We have the unfortunate practise of extending COPs beyond the time when we are supposed to finish, in the hope of trying to reach that place where we can say and feel that we left here with something after the two weeks and, in some cases, three weeks of non-stop negotiations.

“So, I will say, based on past experience, there is still time for a turnaround. We have yet to see in which area, which process will create that space and give that leverage to unlock certain issues across the board,” she, however, added.

Asked if she was optimistic that things could change, Haynes said, “I am managing my expectations.

“I wouldn’t call it optimism at this stage. No. I hear that some baby steps are being taken in finance and we are waiting on a text from the COP president on loss and damage.

“We still have to access that,” she said, adding that another proposal by developing countries was “on the way to getting deadlocked again, even though we have made some process.

“So, I would say I am not optimistic at this stage, but, at the same time, I am not closing the door to the chance that there might be some progress.”

Haynes was not the only person or group who had a gloomy outlook on the talks.

Civil society organisations walked out on Thursday, saying that negotiators from rich countries were putting the interest of big business ahead of the planet.

Earlier on Friday, Meena Raman of the Third World Network was sceptical about an outcome that would benefit the world poorest nations, many of which are most susceptible to climate change.

Noting that it was already the final hours of the meeting, Raman said that developing countries were unsure as to whether there would indeed be a roadmap, for the clear delivery of the US$100 billion per year by 2020 which developed countries have committed to climate finance.

She noted that for 2013 to 2020, there is no money for climate financing, adding that the Green Climate Fund has not been capitalised at all.

“So, a lot of this is empty promises thus far,” she said.

Finance to combat the loss and damage resulting from climate change has been a central demand of developing countries, including the blocs to which the Caribbean belongs.

“… they are dillydallying and postponing — and some people say, filibustering — a real outcome in terms of an international mechanism on loss and damage,” Raman said of developed nations.

She further said she had just come out of negotiations were there is “foot-dragging” and the “entire focus is on new agreement where there is essentially no emission, but where there seems a moving away … from the meeting of the implementation gap that we now know exists”.

She said while there were gaps in emissions, finance, and adaptation, there was also “the pushing of responsibility onto developing countries to shoulder the challenge of climate change.

“Every time, I hear words — we want ambitions, we want effectiveness, we want collective action to meet the objectives of the convention. They ring so hollow. They mean nothing, because we have not seen real commitments on the table, and real action on the table,” she said.

“So, from the Third World Network perspective, we actually think the talks will deliver nothing if this is the attitude that is going to persist.

“And we hope that minister will come to their senses and deliver something strong. Otherwise, this process is going to be condemned by social movement and civil society around the world,” she further said.