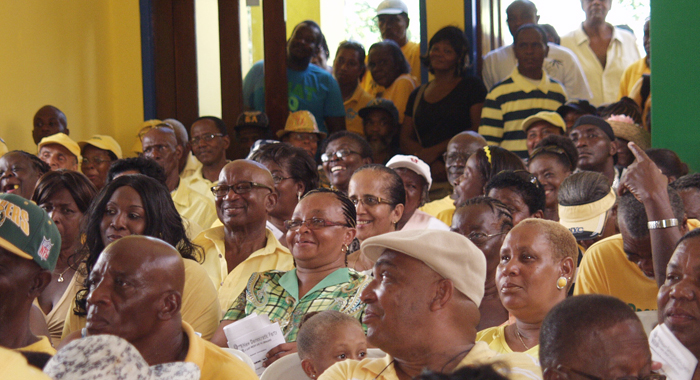 NDP supporters at the party’s convention on Sunday.

President of the opposition New Democratic Party (NDP), Opposition Leader Arnhim Eustace, says he is confident that the party will win the next general elections, constitutionally due in 2015 and has pledged a government of inclusiveness.

“We not only feel the normal Christmas breeze of this time of the year, but the emerging winds of change energizing a confident New Democratic Party,” he told the party’s 38 convention on Sunday.

“We speak with confidence not because we believe the race is already won, but because we know that you have felt our consistent support, representation and work for you all the people of St. Vincent and the Grenadines, while we have been in opposition,” said Eustace, who was returned unopposed as head of the party.

“We will continue as a government to govern in the interest of everyone, whatever your politics, be it NDP, ULP (Unity Labour Party) and any other party. St. Vincent and the Grenadines cannot run on the strength of half the population, and this NDP will work for all Vincentians. This as leader, I pledge to you,” he told party supporters at its headquarters, Democrat House, in Kingstown.

He said that the day of the convention “marks the beginning of the end” of the Unity Labour Party in power.

He accused the Dr. Ralph Gonsalves government of mismanaging the economy and the country’s fiscal resources, while allowing productive sectors like agriculture and fisheries to decline.

Eustace also raised questions about the implications of the financing arrangement for this country’s geothermal project, which is in its exploratory stage.

“We have repeatedly asked the people, ‘Are you better off today under the ULP than you were under the NDP government?’ And without exception, the answer has been, ‘No,’” Eustace said.

“At every meeting, in every community, you hear the word ‘pressure’. In every talk show, the people are lamenting the change in their circumstances. They had a better life under and NDP government.”

Eustace said that Vincentians should not be surprised at this situation because the figures show it.

He said that between 1994 and 2001, this country’s economy grew by an average of 3.5 per cent annually, compared to 1.2 and 2.9 per cent, respectively, for St. Lucia and Antigua and Barbuda, which, combined, accounts for 48 per of the economy of the Organisation of Eastern Caribbean States.

“St. Vincent was way ahead,” said Eustace, an economist and former prime minister, who was minister of finance from 1998 to March 2001.

He said that under the ULP administration, and during the last five years in particular, SVG’s economy has declined.

“The economy did not grow for four consecutive years, and therefore the people of this country had to share a smaller cake,” he said, adding that the situation affects the poor especially.

Eustace said there is always “the excuse of the world economic crisis”, but added that the global economic downturn affects every country and each country must do what it takes to come out of the crisis.

Eustace said that while the Vincentian economy was registering negative growth, growth in Latin America and the Caribbean averaged 3.5 per cent.

“So we are all feeling in our pocket the price of that mismanagement,” Eustace said.

He explained his frequent emphasis on the economy saying, “That is what will give you an income — not a government. It is how the government manages the economy. And if they do it well, you will get an income…

“To have a growing economy is critical to our prospects for the future. And I am saying to you today, that we need therefore, to get the economy to grow to face certain social issues….

“While our economy continues to crumble, while our people young and old remain without jobs, while many Vincentians cannot meet even their most basic needs for food, shelter, school expenses, while the average Vincentian has to face a health system without basic drugs and equipment, the Prime Minister and his cronies are lost in their own mismanagement,” Eustace said.

He said the lack of job for the nation’s secondo day and post-secondary graduates results from 12 years of mismanagement, by an “inept” ULP administration and their leader.

“Today, my thoughts and concerns are for the poor, who live under a system that charges VAT on breadfruit in the supermarket, the people who labour under an energy surcharge that causes their electricity to be cut off, the sick who cannot get basic drugs, or treatment, my thoughts are with the parents who struggle to send their children to school, unable to meet transportation cost, and to purchase school supplies. What becomes of those whose education is cut short because of poverty?

“My thoughts are with the farmers, who once provided for their families, now put on welfare. I think about this system, which still has people over the age of 80 still earning lavish salaries, while college graduates languish, unemployed and demotivated.

“I think about this system bragging that they are training people for export, when in fact they cannot provide employment for our people at home. I see a system that has led to businesses closing, hundreds of persons being laid off and out of work. A system that frustrates our young people, providing instead an incentive for crime, a system which as a matter of policy victimizes supporters of other political parties, a system that tolerates corruption.

“In short, what we have is a chaotic SVG. This situation cannot continue. The ULP has to go and go now. The NDP is ready,” Eustace said.

He said the NDP “stands ready to face …with courage” a new term in office, and is confident of success.

“As leader of this great party, now in its 38th year, I make the following pledge to you, the people of this country:

“Our talented, mutli-skilled team of candidates, with your help, will remove the ULP from power at the next general election, rebuild this nation’s shattered economy, increase employment and income, restore our moral fibre, reduce crime and corruption and let Vincentian people smile again.”

He said that in 2001, ULP had the country in 12-3 stranglehold, but the one seat majority now shows that people are no longer fooled by rhetoric.

“They only get away by the skin of their teeth. Not again, not again,” Eustace said.