In open letter, Eustace accuses Sir James of being a ULP ‘acolyte’ 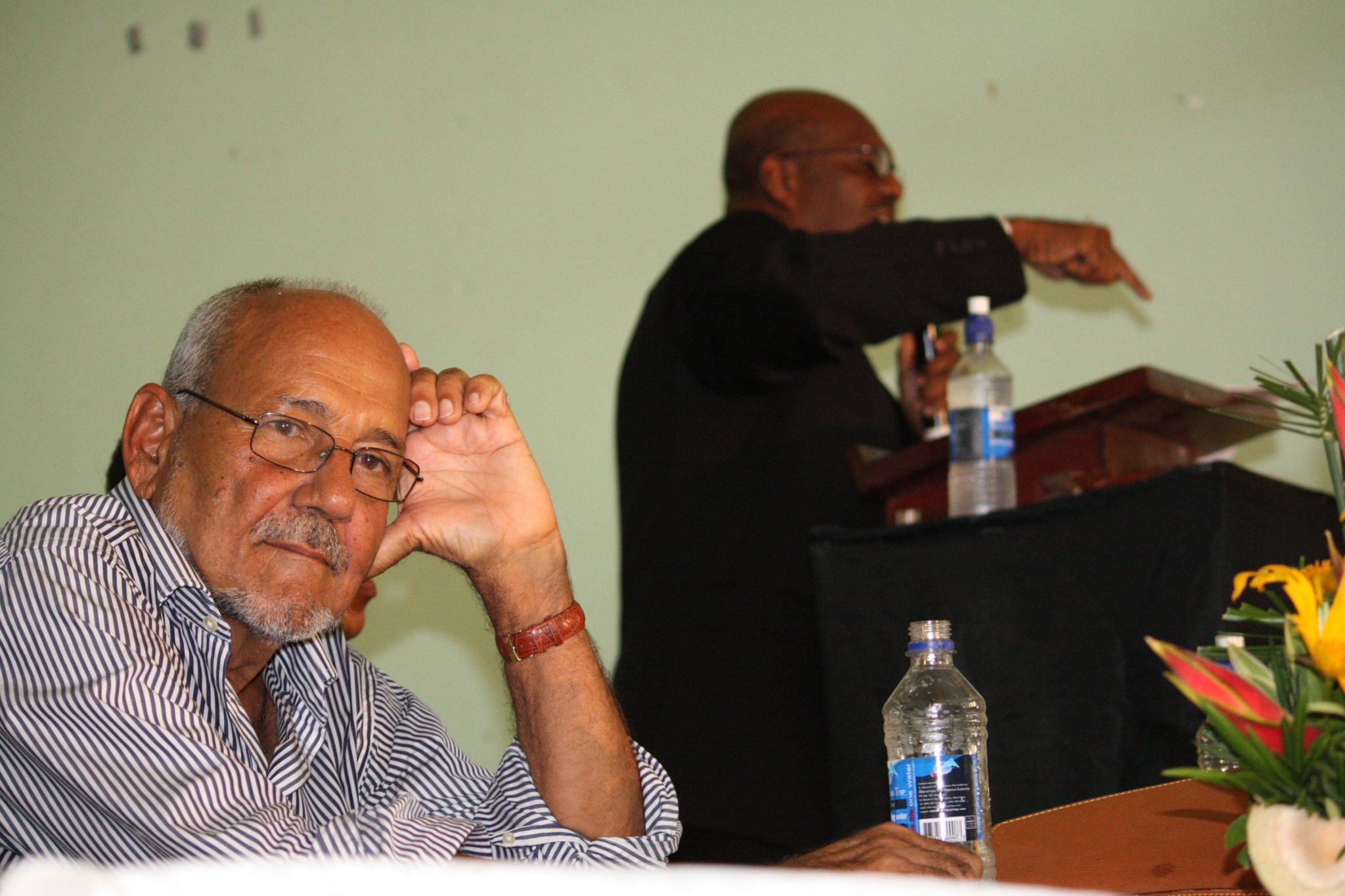 Sir James Mitchell at the NDP convention in 2010 as then party president, Arnhim Eustace delivers and address. The two have been hostile to each other publicly. (IWN photo)

President of the New Democratic Party (NDP), Opposition Leader Arnhim Eustace, has written an “open letter” to party founder, Sir James Mitchell, accusing him of being an “acolyte” of the ruling Unity Labour Party (ULP).

Eustace’s letter on Wednesday came in the wake of another barrage of criticisms Mitchell levelled against him after the NDP’s 37th annual convention on Sunday.

The letter is Eustace’s most substantive response to date to the bruising criticisms he received from Mitchell, who handpicked him to become prime minister and leader of the NDP in 2000, five months before the party was voted out of office, after 17 years.

Sir James, a former prime minister for whom Eustace was fiscal advisor and later minister of finance, has expressed his disappointment in the leadership of Eustace, who has been at the helm of the NDP when it suffered three consecutive defeats.

Sir James retired from electoral politics in October 2000, several months after mass protest forced him into negotiations with then opposition leader, Dr. Ralph Gonsalves, and an agreement to halve the NDP’s fourth term in office.

However, although the NDP is yet to win an election with Eustace at the helm, under his leadership, the party has increased the number of popular votes it has received in each election since 2001, even as the ULP has registered constant decline.

In 2010, the NDP came one seat short of winning the elections, increasing from three to seven the number of seats its held in Parliament after the 2001 and 2005 elections.

Sir James has consistently used his appearances on IKTV, a television station in which one of his daughters is a shareholder and managed by his son-in-law, to level his criticisms against Eustace.

In his latest set of criticisms, he said that he did not attend the NDP’s convention on Sunday although he was invited.

He further said that had he attended, he would have demanded that the feature speaker, Luzette King, who says she is a card-carrying member of the ULP, tear up her party card.

Eustace read his open letter during the NDP’s daily radio programme on Wednesday. He said that he was “not at all surprised” after the NDP’s “successful” convention on Sunday, to hear Sir James make his “usual negative comments” about him and the NDP.

“All NDP supporters and the general public now expect that from you. As far as you are concerned, without you the NDP can do nothing right. I must say, that I have come, over recent years to regard you as an acolyte of the ULP, activated, particularly when our party’s message is resonating with the people,” Eustace said.

He, however, said he was amazed at the depth to which Sir James descended, “indicating that our Convention’s Guest Speaker Ms Luzette King would have been compelled by you to tear up her ULP party card had you been on the platform”.

“I found your statement infantile and in poor taste. We in the NDP have made it clear that we have a big tent and all persons regardless of party affiliation are welcome. This is our policy and the hallmark of the type of Government we shall form when we take office,” Eustace said.

At the NDP’s 2010 convention, Sir James said that Burton Williams — a former minister of health in Sir James’ cabinet who left the NDP in 1994 after a fallout — had to apologise at the convention before receiving his blessing as a candidate in the 2010 general elections.

Eustace said in his letter that for several years Sir James has not attended the NDP’s convention, despite being invited on all occasions.

“[W]e invited you because of the substantial historical role you played in our party. You indicated that for this convention, you regarded the invitation from General Secretary Allan Cruickshank as coming from ‘hypocrites.’ Now that you have expressed your position on this matter, we will act in accordance with your wishes at our next convention. We do not wish you to be uncomfortable in the company of hypocrites,” Eustace wrote.

“Curiously, these past years, where our nation has teetered on the brink of economic collapse, you have chosen consistently to say almost nothing in criticism of the ULP administration that led us to the edge and lacks the capacity to turn back now. Instead, you point aim, always, at the NDP,” Eustace said,

He said that in Sir James’ “usually negative, post-convention comments”, he said, “it would be a disaster if next time around Eustace loses his seat; we had a real struggle last time to make sure that he kept his seat.”

But Eustace, who has been representing East Kingstown since 1998 and was the only NDP candidate on mainland St. Vincent to win a seat in 2001 and 2005, said that Sir James’ statement “is a lie”.

“My margin of victory in East Kingstown last time around reached to 467, an increase of 310 votes over the previous election — a tripling of my lead,” said Eustace, who defeated the ULP’s Luke Browne in that constituency.

“What did you have to do with that result? Nothing. Indeed, during the last election, we had difficulty with your unacceptable comments relating to Almighty God, for which you were asked by me to apologise, and did,” Eustace further said.

On Sept. 10, 2010, as the election campaign gained momentum, Sir James called for the immediate presence of international observers here.

“We want them here to go and see what is happening with the Supervisor of Elections [Sylvia Findlay-Scrubb]. I know that she is an honourable lady, a distinguished lady and so on; but I don’t trust even Jesus Christ when there is elections, until I see the results,” he said.

Eustace said then that such a statement was “wrong”.

“The New Democratic party cannot defend that statement. … But Sir James himself recognises what he did and he called me the day after and he said, ‘I did something wrong’,” Eustace said then.

“Sir James, you, may well have cost us votes. I quietly observed that you had become an anachronism,” he said in his open letter on Wednesday.

“You indicated that over the years, presumably since you left, the NDP has been slumping in the vote. That is also a lie,” Eustace further said.

“We both know there is more to be said, but the issues that confront Vincentians take priority. I must return my full attention to the cries of the unemployed, the single mothers, the struggling farmers, our battered tourism, failing healthcare, our crumbling economy and those challenges which we in the NDP are being asked to face on behalf of a hurting population.

Eustace was on Sunday returned unopposed as President of the NDP.

4 replies on “In open letter, Eustace accuses Sir James of being a ULP ‘acolyte’”