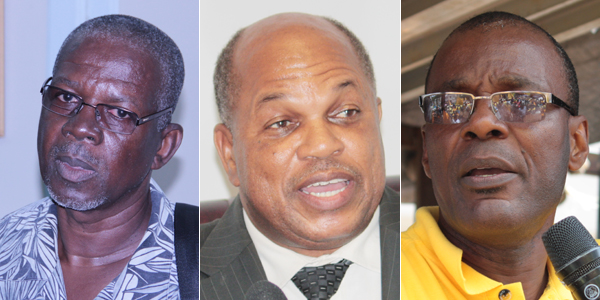 General-Secretary of the opposition New Democratic Party (NDP), Allan Cruickshank, says he voted for party chairman, Sen. Linton Lewis, amidst a challenge for the post by Daniel Cummings at the NDP’s annual convention on Nov. 24.

Cummings, who is MP for West Kingstown, and Lewis, a lawyer, who has failed to win in West St. George once and in East St. George twice, tied 135 votes each at the convention.

Cummings conceded the position, saying he considered the tie to mean that he did not “beat” his colleague, the NDP said in a release.

The challenge by Cummings has resulted in some comments that there is a plan to remove Lewis as chairman of the NDP.

But Cruickshank downplayed such a suggestion, telling I-Witness News that “as a democratic organisation, any position [in the NDP] can receive challenge at anytime.

“I don’t believe that there is any plan to remove him (Lewis). I just believe that the other person is interested in taking that post, or, in his own view, he probably feels he can do a better job. Because no man is perfect in anything,” Cruickshank further said.

Cruickshank told I-Witness News that he is “satisfied” with Lewis’ performance as chairman of the NDP.

“I think he is an excellent chairman. He advises me perfectly and especially when it comes to the interpretation of the rules and the clauses of the constitution. I can always rely on him.

“I also believe that Cummings would have done the same thing, but I, as General-Secretary of the party at this moment, I am a very strong supporter of Dr. Lewis as chairman of the party. I say so without any hesitation, without any water in my mouth,” the former MP further said.

Asked if he voted for Lewis at the convention, Cruickshank said yes.

Meanwhile, asked about comments by party founder and former prime minister, Sir James Mitchell, that current president of the NDP, Opposition Leader Arnhim Eustace, should give quit as head of the party, Cruickshank said:

“We have to realise, those of us who were there before, since 1984, that there comes a time when we have to give way to others and we must give way honourably,” he said.

The NDP came to office in 1984 and remained in office until it lost the March 2001 general elections.

Asked if he thinks Sir James is giving way honourably, Cruickshank told I-Witness News, “I can only talk for myself. The public can judge for themselves.

“I was once vice-president of that party for a very long time and once I was informed that my services were no longer needed. I don’t think it was put to a vote at that particular time,” he said.

He said he was informed of the change by “members of the party, even before any action was taken.

“And I said, ‘Gentlemen, this is a dynamic organisation and I feel I can serve elsewhere’,” Cruickshank recounted.

“… just after a defeat, you feel down — you know just like in 2001, and the party has to restructure and if the restructuring process involves me not being a vice-president, fine.

“But, you know people; everybody is not the same. I kept a low profile; I did what I could on the ground, especially in the constituency. Now, a few years later, I became general-secretary,” said Cruickshank, who will next year complete a second three-year term as general-secretary of the NDP.

Asked about his opinion of Eustace’s leadership, Cruickshank said, “I am fully committed.

“I continue to say, regardless of who is the leader. There is different type of leadership, and no two men operate the same way. I am satisfied with and fully committed to him [as] leader.”