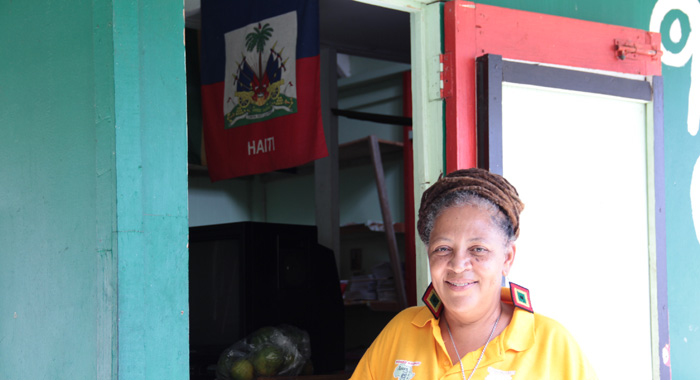 A naturalised Vincentian who was born in Haiti says that Prime Minister Dr. Ralph Gonsalves should allow about 10,000 Haitians — some 10 per cent of the population of St. Vincent and the Grenadines — to move to this country legally.

“Honestly, I don’t think more than 10 per cent of your population would hurt you … Would it hurt to have 10,000 Haitians here?” Empress Modupe Olufunmi Jacobs, who married a born Vincentian in 2008 told I-Witness News.

Jacobs spoke to I-Witness News about the ruling by the constitutional Court in the Dominican Republic that denies citizenship to persons of foreign parentage — mostly Haitians — born in the Spanish-speaking nation after 1929.

Prime Minister Dr. Ralph Gonsalves has been very critical of the ruling and has written two letters to President of the Dominican Republic, Danilo Medina, asking that his government address the situation.

Gonsalves has also called for what amounts to the diplomatic isolation of Santo Domingo, until the issue is resolved.

Jacobs told I-Witness News that she did a documentary some time ago, in which Gonsalves said that in order to assist the people of Haiti, he is sure that some Vincentians, including himself, would welcome a few Haitians into their families.

“I don’t think that is such a bad idea,” Jacobs said, but added, “… some will argue that we are going to take work from Vincentians and so on and so forth.

“I beg to differ,” she, however, said. “I think we will contribute a lot to this country, if a few more of us are admitted legally,” she told I-Witness News.

“To me, that type of ruling marks the beginning of an OK for those ultranationalist in the Dominican Republic to start their witch-hunt against Haitians,” she said, noting that the two countries, which share the island of Hispaniola, have had their moments of “being united against foreign oppressors against the French and the Spaniards, and even the US”.

She, however, note that the two country have also had “a historical division with the migration of Haitian … agricultural labourers, to the Dominican Republic from the time of the American occupation.

“And you find there has always been some resentment against Haitians claiming any rights in the Dominican Republic…” said Jacobs, who left Haiti for the United States in 1965, when she was 9 years old, and last returned in 1980.

“The other thing is that really disturbing too is being able to just locate a community of Haitians and, from since that ruling, have Dominicans themselves single them out for mob attacks.

“Any little crime that is happening in the Dominican Republic is attributed to Haitians, like a recent murder of two elderly couple in a town have them witch-hunting for Haitians.

“Since this ruling, I believe several hundreds Haitians have already been deported to Haiti,” she told I-Witness News.

“I hear of instances where people who are born there, who don’t even speak Creole, don’t even speak French, just get thrown off the land, sent across the border; instances of babies being separated from their mother,” Jacobs said.

But she was also critical of the Haitian government– citing the allegations of corruption, and of CARICOM — saying that some members of the regional bloc also have negative attitudes towards Haitians.

Jacobs told I-Witness News that the efforts by Gonsalves and CARICOM “are noble”.

“It would help if CARICOM had any teeth. Can CARICOM countries or will CARICOM nations agree to take economic sanctions against the Dominican Republic, where it would really hurt.

“I know we are not military nations, so we won’t forcibly, and I wont even suggest that, the invasion of one country, of the next, or CARICOM even thinking in terms of that,” Jacobs told I-Witness News.

Jacobs was also not pleased with the attitude of some CARICOM nations to Haiti, which is also a member of the 15-member regional grouping.

She noted the recent case in which Haitian Rachel Lalanne was made to pay US$100 for a visa in Barbados to allow her to transit there, en route to St. Vincent.

“Why did she have to pay that one hundred US? … Anywhere we go on a Haitian passport, you can bet somebody is going to try to shake us down. We are the pariah. Haiti has never been forgiven for being a people who stand up for their rights,” Jacobs said.

“Caribbean nations are no different than African nations who think Africans born in the diaspora are not African. So, Caribbean nations, very much colonised by their colonial masters, still see themselves as those colonial bodies and they have prejudices against one another.

“I think it is this fear. Wherever we are, … we have a strong sense of self, we have a great work ethic; wherever we go, we work with the least we have to make the best and some people don’t like that.

She spoke of the comments of some Vincentians after the earthquake that devastated Haiti in 2010.

“When that earthquake hit, that’s when I started seeing Vincentian prejudice against Haitian, because of the things I heard coming out of people’s mouth.

“They were repeating the same things [American televangelist] Pat Robertson was saying: ‘It’s your evil, it’s the voodoo, it’s the backwardness, it’s the ungodliness that make you all suffer so much’,” Jacobs recounted.

“I have met a small percentage [of Vincentians] that to this day have this things about Haitians being tied to some sort of occult practise and … that wherever we go, we arrive their through some sinister method.”

Jacobs told I-Witness News that pressure should be brought on the United States government regarding its policies towards Haiti and the Dominican Republic, regarding “US companies that are placed in these countries that exploit labour”.

She was also critical of US immigration policy toward Haiti, saying, “… the US discriminates greatly against the migration of Haitians since the 60s when they took out the brain drain and the most skilled of Haitians.

“Their policy has totally reversed regarding Haitians coming as migrants…” Jacobs said.

Jacobs said that she has worked with Haitian expats in the United States, and has remained close to her country although she has not returned there for 33 years, after the response to her a Rastafarian during her last trip there.

She has also lived in St. Lucia and Grenada.