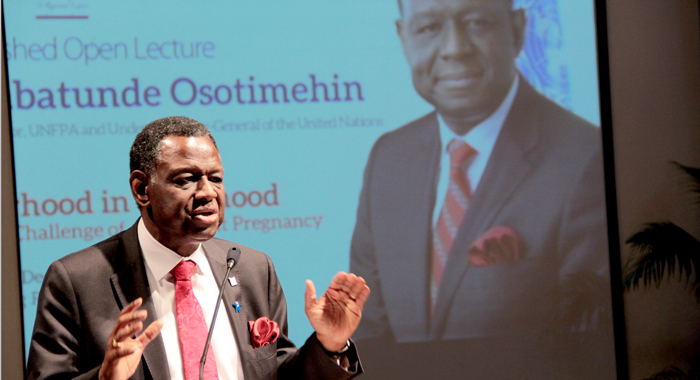 Dr. Babatunde Osotimehin speaks at an open lecture as part of the one-day consultation. (IWN photo).

Port-of-Spain, Trinidad – A one-day high-level consultation on adolescent pregnancy in the Caribbean wrapped up here with Executive-Director of the United Nations Population Fund (UNFPA) Dr. Babatunde Osotimehin pleading with participants to act urgently to eliminate this social ill.

“I want us to put on ourselves a sense of urgency,” Osotimehin said at the end of the discussion on Monday, adding, “In the time that we have been here, I can tell you, in these islands, at least two people have died from this (adolescent pregnancy).

“Two young girls died because they have not been properly guided.

“I hope I can get some sense of urgency and get you to actively begin to see this as something we must begin to go out tomorrow and begin to implement,” Osotimehin further said.

It is estimated that 20 per cent of adolescents in the Caribbean have had at least one child by the age of 19, with a considerable percentage of adolescent girls giving birth before the age of 15, the UNFPA says.

“And, indeed, all of us sitting here know that we are not talking about your daughter, your sons, your cousins, your nieces,” he told the multi-stakeholder, high level consultation.

“So, I just want to plead, no matter what your station in life, no matter where you stand as we talk about this, let us go out commit ourselves and make sure we do this with some sense of urgency,” Osotimehin further said.

He said he was glad that government ministers, along with civil society, faith-based organisation, youth and UN organisations were at the meeting.

The one-day consultation, which was also held in collaboration with CARICOM and the government of Trinidad and Tobago, discussed strategies with a view to halving within five years the number of adolescents in the Caribbean who give birth before their 20th birthday.

Osotimehin said girls all over the world, particularly in the Caribbean, are having sex earlier and have their first sexual encounter with people they know.

He further said that many of these girls have their first sexual encounter in violent circumstances, and with men they know, including their fathers, stepfathers and neighbours.

“People they don’t expect it to be [with],” Osotimehin said.

He noted that the extent of the problem varies from country to country. “What we need to do, which is why we are here is to provide information about this,” Osotimehin said.

Every country should provide family life education that will provide comprehensive sexual education, he said, adding that many young people do not expect and cannot explain the changes in their bodies at puberty and do not know their “vulnerabilities”.

“If they know their vulnerabilities, they are likely to want to take the appropriate steps to want to prevent themselves from being involved.

“I think, going beyond that, it is also the issues of counselling services and access to information in terms of where they can get it, who they can talk to, who can help them, to empower them to prevent this sort of thing from happening,” he said in relation to pregnancy.

Osotimehin said that while sex education is available, in many instance, it is “not structured”. Further, although there is “subliminal” information about sexuality in almost every advertisement, this is not sex education, he noted.

“What we mean is the ability of the young lady and the young man to understand that there is a period when she can get pregnancy,” he said, noting that in addition to the risk of pregnancy, many young persons are also exposed to sexually transmitted disease, such as HIV.

“And I think, finally, the ability of the young girl to say, ‘I am not ready for this, … this is how I want to live my life and these are my goals. I am in school; I want to stay in school. I don’t want to get pregnant.’

“All of that has to be inculcated and put together for them to understand that you can actually do that and come out being a person of your own worth, confident and being able to take decisions about yourself,” Osotimehin said.

He said that some elements of sex education are not effective, adding that curricula have to be designed in a culturally sensitive manner and delivered in the framework of general education.

“Sex education is not about biology,” Osotimehin said, adding, that even some teachers are not comfortable delivering sex education content.

He, however, said in addition to school, the family and religion must play a role in this regard, adding that religion cannot treat sexuality as if it does not exist.

But Osotimehin also said that adolescents are “reasonable people too.

“They don’t want to totally abrogate their lives at 15 and at 12; but these things do happen,” he said, noting some of the misconceptions about the relationship between sex and pregnancy.

“So we need to get these things out there to get them to understand and to be able to take decisions about their lives where they would not be vulnerable.

“… when we do education, we also must provide services, and those services must be in a manner in which we are not judgmental,” he said, adding that many young persons do not access these services because providers know and will tell the youths’ parents.

“We have to design youth-friendly services to ensure that they can get it, so that they can actually, of their own volition, decide…” he said.

“I think that is what we have to and provide universally, because otherwise, it might be difficult of get this to work.”

But while developing countries have the highest instances of adolescent pregnancy in the world, developed countries, like the United States, also have high rates.

“In the developing world, most of the adolescent pregnancy is in the lower social class,” he further said.

The meeting was also hoping to raise political commitment, because, Osotimehin said, “we’ve seen that once government decide that this is what is going to happen, people rally around it.

He, however, added that reducing adolescent pregnancy is not an issue for governments alone, but that there is also a role for civil society and adolescents themselves.

“… at the end of the day, we are hoping that over the period of the next four, five years, we should be able to reduce adolescent pregnancy by 50 per cent in the region,” he said.

“Every girls that gets pregnant, actually it destroys practically their future — prospect of school, prospect of a job. And the girl or the boy that she bears, actually also faces the potential of poverty, because, if you look at it and you talk to them, the people who are responsible for the pregnancy are people who are not able to provide for themselves,” Osotimehin said.

“I think that at the end of the day the message I want to send is that the UNFPA …, working with CARICOM, which is the entire region, political, and working with private sector, working with civil society and young people are here to make change happen so that young men, young women can actually live out their dreams, become hey want to become without getting pregnant early and contribute to the development of these beautiful islands,” Osotimehin said.