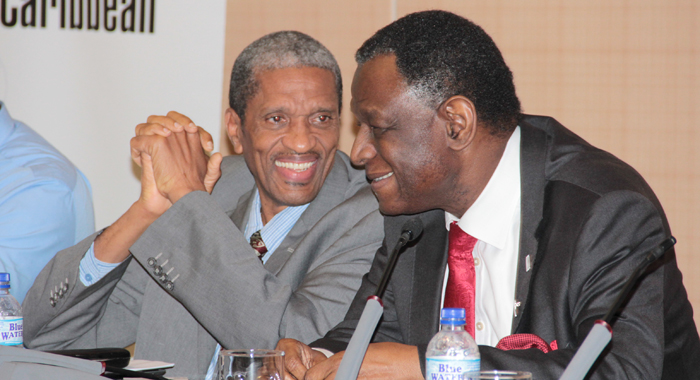 PORT-OF-SPAIN, Trinidad — A high-ranking CAIRCOM official says it is time for the region to confront head-on the scourge of sexual abuse of children.

Dr. Douglas Slater, CARICOM’s Assistant Secretary-General for Human and Social Development, said this week that the sexual abuse of children across the region remains a major contributor to adolescent pregnancy.

He told the opening of a multi-stakeholder, high-level consultation on teenage pregnancy on Monday that the sexual abuse of children is “an age old and disturbing trend which in times past has been taboo to discuss in public and which has been often ignored because of the ‘provider’ consideration”

He, however, said this has close and direct and indirect linkages to adolescent sexual behaviour and practices and, adolescent pregnancy.

“The time has come to confront this scourge head-on. The region has recognised this and in recent years has been forthright in its advocacy and determination to address the challenge. We cannot neglect this as we develop a strategy to reduce adolescent pregnancy,” said Slater, a physician, who is former minister of health, and foreign affairs in St. Vincent and the Grenadines.

Slater later said in an interview that the sexual abuse of children is a “serious issue”.

“One incidence of child abuse is serious but unfortunately there are many more than one incident,” he said, adding, “There tends to be a practise in the region where it is kept, as it is said, under the carpet because of the shame it brings to families.”

He said it is estimated that family members or persons well known to the family of the victim commit over 40 per cent of cases of sexual abuse of minors in the region.

Slater said that of special concern are children under the age of legal consent, noting that sexual contact which such persons is a criminal offence.

“But what we are saying is that quite often, even when the authorities attempt to prosecute, there are many hurdlers; that is, the relevant evidence is not able to be mobilised to go to court,” he said.

“Because quite often, [the suspected offenders] are claimed to be breadwinners, providers for the family, and you have … the parents of the children not want[ing] to go through the court system because of the perception of shame and many other factors.”

Slate further said that it seems that legislation is not being enforced, or in a way where it can ensure that perpetrators can be brought to justice.

Ten government ministers attended the consultation and Slater said that as lawmakers, he hopes that they examine what can be done.

In CARICOM, it is often difficult to prosecute persons suspected of sexual abuse of minors because parents are unwilling to cooperate with the authorities.

Asked if he thinks that CARICOM nations should change their laws to allow the use of DNA and other evidence in these circumstances, Slater said,

“I will be very supportive of that.

“I think it would be good if we can have a model legislation in the CARICOM region,” he further said.

He said uniformed legislation should not be difficult, since all CARICOM nations, except for Haiti and Suriname, model the British legal system.

“… I have from time to time, in my previous life, raised that issue and it is one of the issues that I am passionate about,” Slater said in relation to his years as a legislator in St. Vincent and the Grenadines.

“But the legislation that exists, the enforcement of it has been a problem. There are times when, yes, there were some successes, but there are too many challenges. I think it should be easier that perpetrators of child abuse should be brought to justice,” Slater said.