PM Gonsalves off to visit the Pope 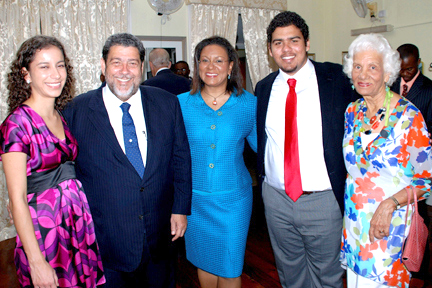 Prime Minister Dr. Ralph Gonsalves left the country midday Monday to visit the Vatican at the invitation of Pope Francis, the Office of the Prime Minister said in a release.

Gonsalves will meet with the Pope at the Vatican on Dec. 19th and will return to the country on Dec. 28.

His delegation includes his wife Eloise Gonsalves, and their children, Isis, Soleil and Storm.

The other members of the delegation are Wafic Said, non-resident ambassador to the Holy See and his wife, Rosemary Said.

This country’s Permanent Representative to the United Nations, I. Rhonda King, and

Adrian De Freitas, a representative of the Catholic Community are also part of the delegation.

The Prime Minister is meeting the travel expenses of his three children and Miss Harris.

Ambassador Said is meeting the travel expenses for himself and his wife.

The Vincentian members of the delegation were midday Monday already in London, having travelled earlier, except Storm Gonsalves who is in the UK, the Office of the Prime Minister said.

It is the second time that Gonsalves is paying an official visit to the head of the Catholic Church.