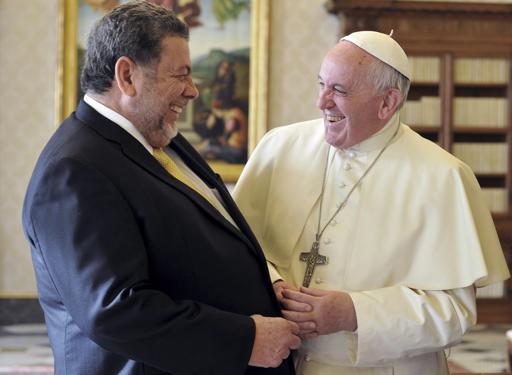 Prime Minister Dr. Ralph Gonsalves met with head of the Catholic Church, Pope Francis, during an official visit to the Vatican on Thursday.

A release from the Vatican said Gonsalves also met with the Vatican’s Secretary of State, Archbishop Pietro Parolin, who was accompanied by Archbishop Dominique Mamberti, secretary for Relations with States.

“The colloquial discussions focused on matters of common interest such as the defence of life and the family, education and interreligious dialogue.

“Finally, mention was made of various issues regarding the countries in the area and collaboration within the ambit of regional organisations,” a release from the Vatican said.

A video posted on the Internet shows the pontiff telling Gonsalves in welcome, “I hope you feel at home.”

“Thank you very much. I’m so honoured to be here with you,” responded Gonsalves, who is a Catholic.

Gonsalves then went on to introduce his youngest daughter, Soleil Gonsalves, who is a member of the official delegation visiting Vatican City.

Gonsalves gave the pope a number of books, including his autobiography, “The Making of De Comrade” and a volume detailing several of the Grenadine islands.

“I will keep in touch with you. God bless!” Gonsalves said at the end of the meeting.

Gonsalves left St. Vincent on Monday to visit the Vatican at the invitation of Pope Francis, the Office of the Prime Minister said in a release.

He heads a delegation that also includes his wife Eloise Gonsalves, and their children, Isis, and Storm.

The other members of the delegation are Wafic Said, non-resident ambassador to the Holy See and his wife, Rosemary Said.

This country’s Permanent Representative to the United Nations, I. Rhonda King, and

Adrian De Freitas, a representative of the Catholic Community.

Gonsalves is expected to spend Christmas in Britain and return to St. Vincent on Dec. 28.