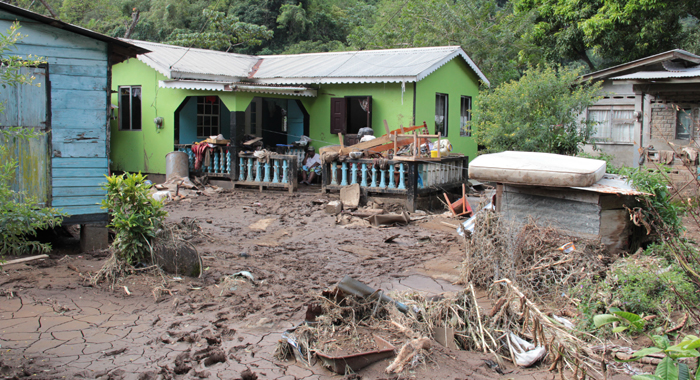 Rita Charles, 63, of Spring Village, looks out at the damage to her property. (IWN photo)

Prime Minister Dr. Ralph Gonsalves has described as “horrific” the extent of the damage in North Leeward after the flooding and landslides triggered by torrential rains on Tuesday.

Eight people died, including five in one household in North Leeward, and give were still missing on Friday.

Gonsalves, who returned on Thursday from a shortened vacation in Europe, toured North Leeward on Friday.

(See photos from the PM’s tour)

Many houses there are damaged or destroyed, there is extensive damage to parts of the road network, and several bridges have collapsed, including one in Fitz Hughes, where there was no evidence that it contained reinforcement steel when it was standing.

Gonsalves spoke to journalists close to the bridge even as anxious residents, who had been without water for days, milled around and expressed their concerns.

Here are the some the highlights of what the Prime Minister said. The full audio of the 5-minute interview is posted below.