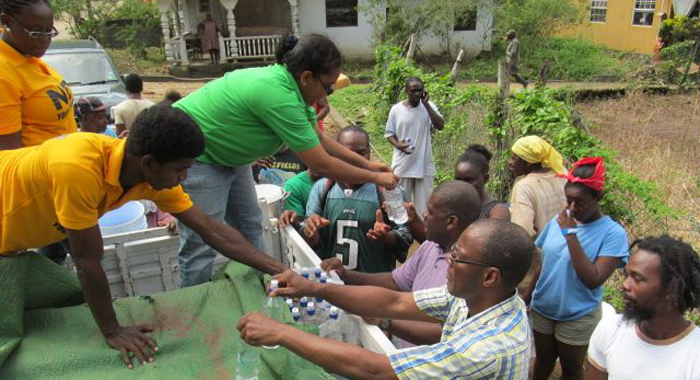 Opposition Leader, Arnhim Eustace, accompanied by North Leeward Area representative, Roland Patel Matthews, MP for West Kingstown, Daniel Cummings, Sen. Vynnette Frederick travelled to Spring Village and Rose Bank on Friday where they met with and heard from the villagers who have suffered extensive loss and damage to property.

Eustace brought with him and delivered to a thirsty people, a truckload of water, The New Democratic Party said in a release.

The NDP said that the 50 cases of water were the last remaining at Mountain Top Spring’s depot, adding that the local water bottling company was facing its own supply challenges as their factory was cut off by landslides on the Windward side of the island.

Some 40 per cent of consumers in St. Vincent remain without water supply after the trough system, which triggered floods and landslides and claimed eight lives across the country.

Five persons were still missing as of Friday.

The NDP said that the villagers were extremely happy for a taste of drinking water, which they said has been in scarce supply since Christmas Eve morning.

The NDP will head to the North Windward affected constituencies on today, Saturday, but added that its penetration of the constituency will depend largely on the access to roads, as they continue to monitor the government bulletins on road closures in the area.

Eustace was met as well by the Prime Minister who was also touring North Leeward on Friday.

“The political leaders shook hands and spoke about the extent of damage to the constituency and country.  The NDP continues to mobilize regional and international relief support and returned to the airwaves with St. Clair Leacock, MP for Central Kingstown, manning the controls on the New Times Programme, which returned to the airwaves early because of the disaster.

The programme, which broke for the Christmas and New Year holidays, was originally scheduled to recommend in January.