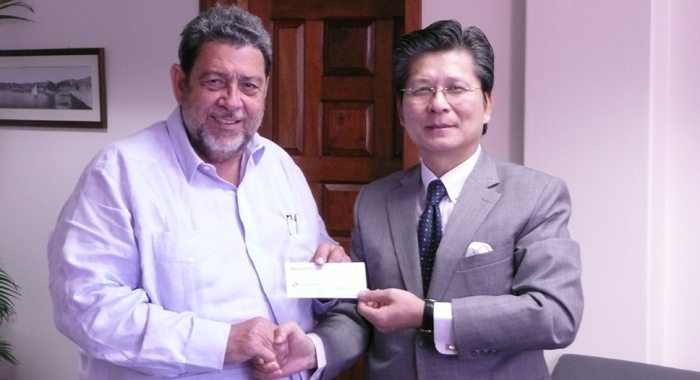 Ambassador Shih, right, presents a cheque for US$200,000 to PM Gonsalves.

Taiwan’s Ambassador to St. Vincent and the Grenadines, Weber Shih, on Tuesday presented a cheque for US$200,000 to Prime Minister Dr. Ralph E. Gonsalves as a donation for emergency relief and humanitarian aid in the aftermath of the devastating floods on the Christmas Eve.

The cheque was presented on behalf of the Government of Taiwan.

Nine persons died in the disaster while four are still missing. There was also extensive damage to public infrastructure and housing.

The envoy expressed the deepest condolences to the families and friends of those who lost lives in the disaster, and wished Vincentian friends who have been affected by this horrific natural disaster a speedy recovery.

Gonsalves thanked SVG’s allies for assistance to cope with the disaster, adding that his government is especially grateful for the generosity and solidarity promptly extended by Taiwan.

Gonsalves also expressed his gratitude to Taiwan for the completion of the passenger terminal building of the Argyle International Airport Project, which was officially handed over to the SVG Government on Monday.

The Prime Minister and Ambassador emphasized that the Argyle International Airport is the biggest project in SVG history, which was started from scratch, and the on-time completion of the terminal building had once again fully exhibited the effectiveness of cooperation between the two countries.

Shih said that he was very proud to be part of the terminal building project from the beginning to its completion, and believed that with concerted efforts, the international airport will be up and running soon and conducive to the nation’s development.