Fridges, stove, mattresses to be provided to victims of Christmas floods 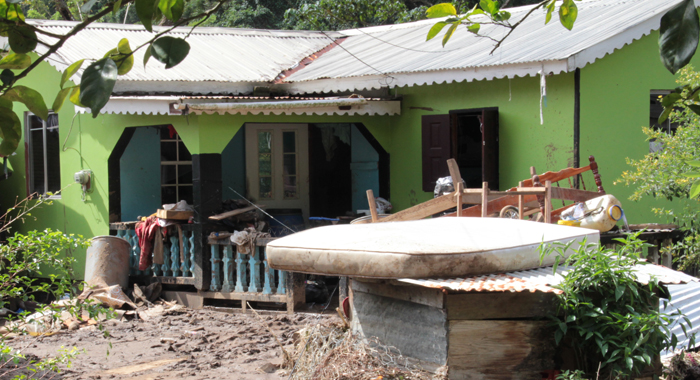 A mattress damaged by floodwaters stand outside a house in Spring Village. PM Gonsalves says a wealthy businessman will donate 1,000 mattresses to persons affected by the 24/12/13 disaster. (IWN photo)

A wealthy businessman will donate a refrigerator and a stove to each household that lost these appliances in the Christmas Eve floods.

He was briefing the media and radio audiences on extent of the damage resulting from the trough system and the response of his government to date.

Nine persons died, three are missing, and 495 houses were damaged in the extreme weather event.

“From the numbers that I have, I can say to you and given what I have negotiated with a very wealthy individual who heads a company internationally, that every single household which has lost a fridge or a stove will get a new fridge and a new stove, so too, mattresses, where we will provide from this particular source, up to 1,000 mattresses, because there are several rooms in the houses,” Gonsalves said.

He said that the National Emergency Management Organisation has distributed 200 mattresses, but added that these are insufficient.

“We can deal with the bed frames to put the mattresses, later on,” he said, adding that older persons, in particular, need bedframes.

“And we will deal with that. I will get the bedframe to be made to put the mattresses …

“I know the elderly, … if they sleep on the mattress which is just on the ground, while that is an improvement on having nothing or something wet, I know the problem when you want to get up…” he said.

Gonsalves did not identify the donor of the appliances and mattresses.

He, however, said that Edge Hill, which was involved in the construction of the Colonarie Bridge, will donate 20 mattresses. The mattresses will be sent on Wednesday.

Prior to the disaster, the company had also committed EC$20,000 to Colonarie, Gonsalves said.