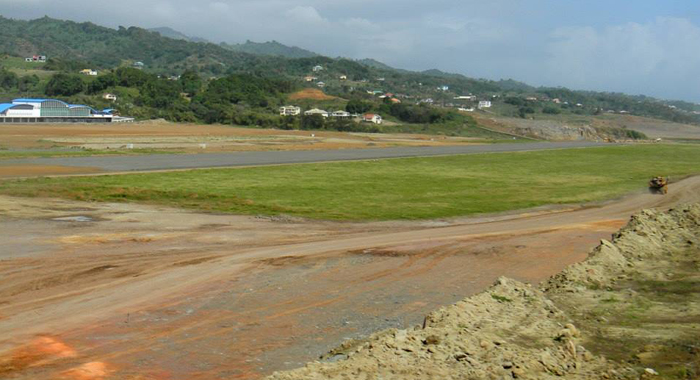 “The monies which are earmarked for the airport, which were specifically given either as grants or loans for the airport they are specific; they just have to continue,” he said at a press conference on Monday in response to a question about how the floods will affect the 2014 Budget.

“In any case, you need the airport to help you — very much so — to strengthen your own resilience to vulnerability. Even in the case of a natural disaster, to bring in stuff, supplies by air, there is a limit what you can do at E.T. Joshua, so that itself is an issue to strengthen the country’s capacity to address the vulnerability issue, both in respect of nature and of the economy,” Gonsalves said.

The airport is expected to become operational sometime this year. The terminal building was handed over to the Government on Dec. 30.

He said supplementary appropriation bills will be needed to bring into account any contribution the country gets for disaster relief, be they grants or soft loans.

Parliament in December approved Estimates of Income and Expenditure for 2014 amounting to EC$911 million.

“Clearly, there have to be alterations in the Estimates which we have before us,” he said, adding that while some projects will proceed as planned, monies will be diverted from others.

He said the South Leeward Highway project, which will rehabilitate the main road from Kingstown to Layou, will proceed as planned because the monies are already available, the designs have been completed and a contract awarded.

The works there will begin in February.

“Sums where there have been specific allocations like that, they are already existing,” Gonsalves said.

He also spoke of the US$20 million, five-year project for vulnerability and disaster after Hurricane Tomas in 2010.

“Those that are spending this year, which have specific component and the funds remain in train, and in some cases which have been contracted will continue. But there are elements of that package which can be repackaged,” he said, adding that there are other projects which the government may wish to redirect, based on the advice of the Ministry of Planning.

“What I have asked them to prepare for me immediately is how much out of that money package of 54 million that I can get to use now by diverting …” Gonsalves said.

He said that a source that is giving monies for computers for secondary school children wants to proceed with the project.

“But some have raised the question as to whether the donors should be asked monies shouldn’t be diverted,” Gonsalves said.

But if out of all the secondary school students I produce 100 extraordinary individuals, that is part of my resilience-building, my capacity-building,” he said.

“So, there are these choices which you have to make, delicate choices, and we can have an interesting discussion as to whether you should have made this particular choice in changing, or this one,” he said.

“The ideal situation, obviously, is if all the new monies you want for this you can get them substantially in grants or soft loans for these new monies which you require. And, of course, this recovery is a process over time. There are immediate things we do, what I call the humanitarian challenge, the road, for instances are going to be rebuilt over a period of time…” Gonsalves said.