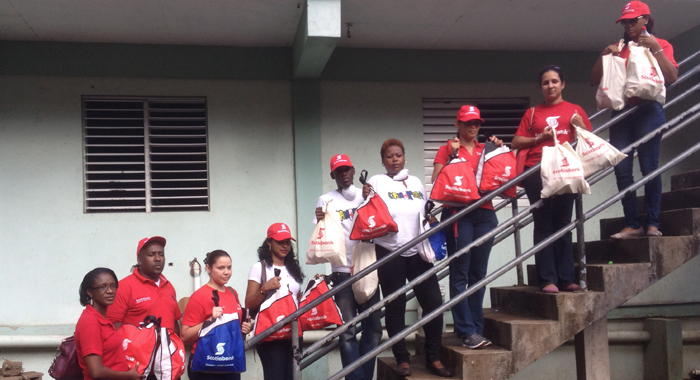 The Can Fest Team along with Scotia Bank staff distribute food parcels to persons at an emergency shelter in Spring Village.

The organisers of Can Fest, an annual charity event that collects and distributes canned food to the less fortunate in St. Vincent and the Grenadines at Christmas, on New Year’s Eve distributed 300 food packages and water to persons affected by the trough system on Christmas Eve.

“We, the organisers of Can Fest, regret the loss of life and damage to property resulting from the trough system on Christmas Eve and express our deepest sympathy to those who have lost loved ones as a result of the extreme weather,” said Kenton Ollivierre, managing director of Can Fest organisers, Main Events.

“We also hope that persons whose lives have been disrupted can be returned to normalcy in the shortest possible time, and stand ready to offer any assistance that we can,” Ollivierre added.

“We are happy that we were able to respond and provide these 300 hundred packages immediately after the disaster. We know that the recent weather event and the continuing fallout is extremely distressing for those affected and the nation as a whole, especially since its comes at what should be the most festive and family-oriented time of the year,” Ollivierre said.

International reggae star, Richie Spice, headlined last year’s Can Fest, which took place in Kingstown on Dec. 13. Can Fest, which began seven years ago, has now evolved into an event management company but continues on its mission to bring the Christmas spirit to the less fortunate.

Nine persons died in the floods and landslides, while three are missing. Some 500 houses were also damaged, the Government says.