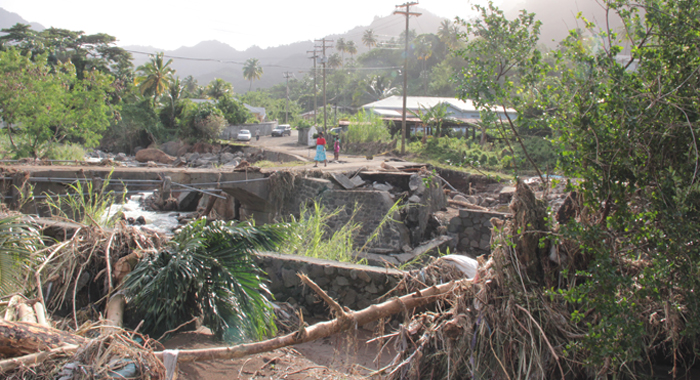 The Opposition says a budgetary surplus would have helped with immediate response to the disaster. (IWN photo)

Leader of the Opposition, Arnhim Eustace, says that the fallout from the Christmas Eve floods highlights the importance of a budgetary surplus, a point that his New Democratic Party has been lamented for years.

The floods and landslides resulting from the extreme weather have left nine dead, three missing and hundred of million of dollars in damage to infrastructure.

“That’s why we always talk about having a surplus. We always talk about that. Well, people seeing it now. We just have to go around now, you’re begging, and you’re borrowing,” Eustace said this week on his party’s radio programme.

“And you would not have done that to any big extent if you in fact had your own surplus. But, you instead have a deficit of 133 million dollars,” he said in response to this year’s EC$911 million budget.

“This shows you how stupid this idea of running a current account deficit indefinitely is. It indicates a lack of wisdom, a lack of prudence in the management of our financial affairs, that no government should get involved with,” said Eustace, an economist who is also a former prime minister and minister of finance.

“We have to be dependent now on a lot of outside assistance to carry us through this period, either through grants or loans. And, at the same time, we have to manage our national debt,” Eustace said.

He said that opposition MPs have stressed the need for a budgetary surplus on the current account to have cash in hand to deal with incidentals like the trough system occurs.

“For years, we have been complaining in this country about having this current deficit and trying to cover it over with some fictitious revenue item which doesn’t exist, and now we are faced with it again, there is no cash to meet our immediate needs.

Eustace said that Gonsalves has said that the NDP’s approach to the budget is about balancing the books.

“You don’t have it today, because you have only a deficit. And I hope people begin to understand now what we are taking about,” Eustace said.

“When we talk about fiscal discipline and prudence and so on, that’s what we’re talking about. I hope people have a better understanding today, as to what this really means.

“If that cash was there, we’d be able to start the very next morning, but it wasn’t there. So you are more and more dependent on asking the population to provide assistance, than the government making the first moves and move ahead to things that are critical.”

Eustace said he believes that with the trough system, there will be difficulties preparing the budget presentation.

“Given the nature of the storm, it certainly is going to impact on whatever budgetary proposals are being made.”

He noted that the law provides only for a month’s grace period, in that the Government can spend one-twelfth of the previous year’s allocation, but must have a budget in place by February.

“There might be some difficulties in meeting that date. And I am just waiting to see what the Government does in that regard.”

Prime Minister Ralph Gonsalves, who is also Minister of Finance, did not give any indication that the date of the budget will be postponed when he spoke at a press conference this week, but said supplementary bills will have to be brought to Parliament this year.