At funeral for four in Rose Bank, one woman is the embodiment of grief 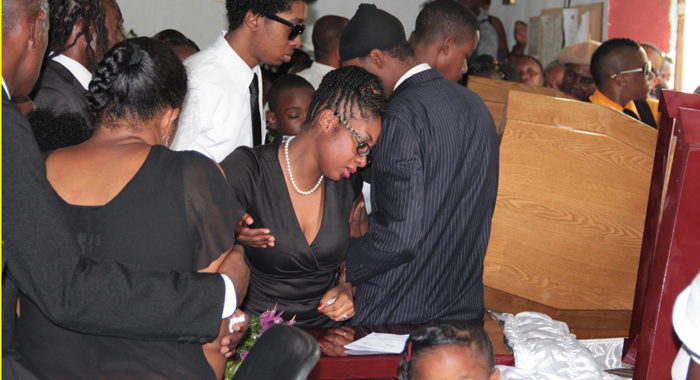 Nolisha Miller, centre, is consoled as she wept at the funeral on Saturday. (IWN photo)

Nolisha Miller was unrestrained in her mourning last Saturday at the funeral in Rose Bank for four of her relatives who died when two houses collapsed under the weight of a landslide there on Christmas Day.

Before the service began, she sobbed loudly, moving from each of the four coffins to the other, reaching inside to touch her departed relatives.

When the priest, delivering his sermon, said that the gathering was to bid goodbye to the departed, Miller wailed “Noooo!”

At one point, so overtaken by grief and crying was she, that one of the priests left the platform, took her to sit with him and consoled her.

Miller was among the last to leave the cemetery, where the four mounds, decorated with fresh and artificial flowers, marked the final resting places of four of the five who died on that fateful Christmas day.

Among the five persons who died and were buried on Saturday were Miller’s grandmother and grandfather, Walsy and Horna Nanton, and Miller’s mother Hazel Nanton-Baptiste.

Bernard Nanton was the fourth person buried on Saturday, while, Yannick Bartholomew, who also died in the tragedy, was buried in Barrouallie on Thursday.

A large crowd attended the funeral, where the departed were sent off in true Rose Bank style, accompanied by the music of the bum drums and pan-around-the-neck, as funeral-goers danced in the street in a scene that was reminiscent of Monday Jam in Kingstown, with soca swapped for lively gospel.

During the procession, the Police Force Band was but a footnote, with its musical renditions and was only allowed some prominence during the rituals at the graveside.

But the procession from Rose Bank to Dark View Cemetery, was in stalk contrast to the sombre and mournful atmosphere inside a cramped Rose Bank Anglican Church.

The extent of the loss and the impact on the family, the community and the nation, was not lost on anyone there, and each persons who spoke at the ceremony, used their words to try to bring comfort.

In his sermon based on Revelation 7:9-17, Father Ashton Francis said that the tragedy was not just about the Nanton family, but also about the community in Rose Bank, and the nation of St. Vincent and the Grenadines.

But he focused his 15-minute message primary on trying to comfort those directly impacted by the tragedy.

“This tragedy is due to the passage of a nameless weather system. Can you imagine that? This system had no name. It was of little significance to the meteorologist,” he said of the trough system, which triggered floods and landslides across the country, claiming a suspected 12 lives — nine persons confirmed dead and three missing.

Francis noted that Christmas is the most joyous time of year on the church calendar, but last Christmas the Nanton family lost five members.

“I cannot stand here and imagine the extent and the intensity of the pain that you, the members of this family, are experiencing,” he said, adding that their tears might flow for years.

He, however, noted God’s promise in Revelation 7:17 — And God will wipe away every tear from their eyes.

“God will enable you to face this tragedy in peace,” he said, citing the Bible account of God enabling his people to come out of great tribulations.

“… God will enable you to come out of this family tragedy. I therefore beg you to stay connected to God, who is more than able to carry you through this period of mourning,” Francis said.

He pointed out that God was with King David when he lost the son that Bathsheba bore.

“And so God is with you now and forever will be. Please stay connected to your God who never fails, a god who always keeps his promises. He will turn your sadness into joy and gladness. He will wipe away every tear from your eyes,” the cleric said, adding, “In order for that to happen, you must stay connected to him through acts of public worship and private prayer. Scripture reading and other acts that will help you to face the days, the months, the years ahead.”

He said that when the bereaved family stays connected to God, he would comfort them and transform their sadness into joy.

“So it is, we are here to thank God for the lives of Bernard, Horna, Walsy and Hazel. Never mind it is due to a terrible tragedy. God is bigger, God is better, and God will carry you safely through from this side to the other. Please, stay connected to God.”

6 replies on “At funeral for four in Rose Bank, one woman is the embodiment of grief”