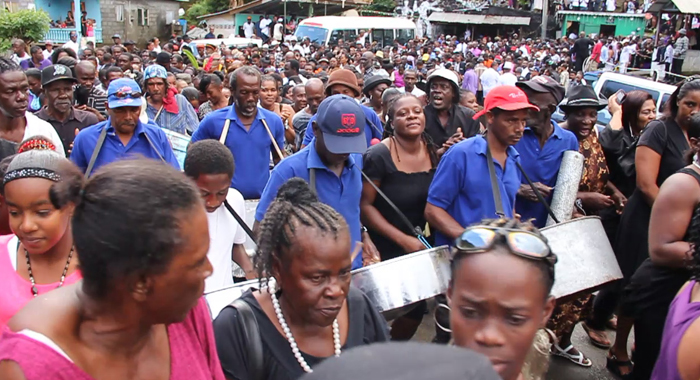 There was a lively procession from the church to the cemetery on Saturday. (IWN image)

Lively steelpan music accompanied the procession from the Rose Bank Anglican Church to Dark View Cemetery on Saturday as four of the five persons who died when a house collapsed on Christmas day as a result of the trough system were buried.

But before the upbeat procession, the four coffins lying in the Rose Hall Anglican church were a graphic reminder of the tragedy that resulted from the weather system.

Yannick Bartholomew, who also died in the tragedy in Rose Bank, was buried in Barrouallie on Thursday.

The intermittent downpours during the funeral service, were an unnerving reminder of the nine who died as a result of flooding and landslides across the country as a result of the extreme weather.

An additional three persons are missing and presumed dead.

Nolisha Miller, who lost her mother, grandmother and grandfather in the tragedy in Rose Bank, was unrestrained in her mourning at the funeral.

Speaking at the funeral service, Prime minister Hon. Ralph Gonsalves highlighted the importance of caring for the bereaved.

Gonsalves also shared his own experience of how he grieved and recovered after one of his son died at a young age.

To some extent, the death and destruction resulting from the 24/12/13 disaster is bringing Vincentians together, across the political divide.

North Leeward representative, Hon. Roland Matthews, an opposition MP, echoed Gonsalves call to citizens to use the deaths as an impetus to begin treating each other better.

In his 15-minute sermon, Father Ashton Francis repeatedly called on the family to stay Connected to God.

In the lead up to Saturday’s funeral, Rose Bank, and the rest of North Leeward, had already begun to come to terms with the loss and damage in their district.

Carlos James, who is vying to be the ruling Unity Labour party’s candidate for North Leeward in the next general elections, was in the constituency when the tragedy occurred and has been involved in the relief effort, said that there is the sense that of community spirit and persons and the government putting restorative measures in place.

Spring Village resident, Rita Charles and her family were yet to completely clean their house, which was flooded out during the disaster.

Water has collected in Charles’ yard and, as a diabetic, she was fearful that the muddy water could create problems her feet.

Also in Spring Village on Saturday, Minister of Works, Sen. Julian Francis, was washing mud from concrete sidewalks at the primary school.

He said it would take another two to three weeks to clean the mud from the other sections of the school, but that it was ready for reopening yesterday, Monday.