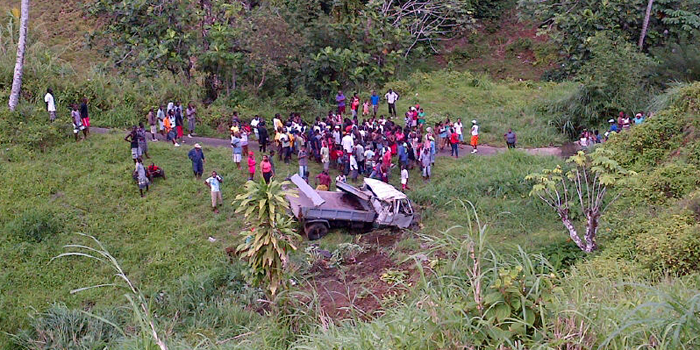 A man died when this truck went off the road on Sunday.

Jan. 27, 2014 UPDATE: The death toll has risen to at least four, as a further two persons in the Maroon Hill accident have died since our initial post.

At least two persons are dead as a result of vehicular accidents on the weekend.

On Saturday, a woman died when a vehicle went off the road in Coulls Hill and came to a stop in Troumacca Bottom, several hundred feet down a steep incline in North Leeward.

On Sunday, Leopald “Pinto” Castello/Grant died on the spot when a truck went off the road between Maroon Hill and Greiggs.

Several other persons were injured in the accident and were taken to hospital.

I-Witness News was unable to verify that a further two died on the way to hospital or while receiving treatment.

There have been at least three confirmed road fatalities so far this year.

Kenson James, an 11-year-old student of New Adelphi died at the Diamonds Health Centre on Jan. 7 after he was struck by a vehicle, police said in a bulletin.

3 replies on “At least two dead in road accidents”