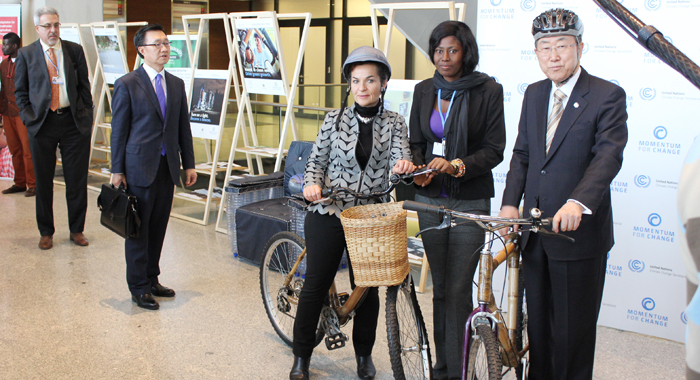 Christiana Figueres, executive secretary of the UNFCCC, right, and UN Secretary-General, Ban Ki-moon, pose with bamboo bicycles from Ghana at the climate summit in Warsaw on Wednesday, Nov. 20, 2013. (IWN photo)

The mood, ambition and announcements at the World Economic Forum in Davos has left me feeling more energized and confident than ever that 2014 will be the year when the world can and must come together to meet the growing challenge of climate change and seize the opportunities manifest in a transition to a low carbon economy.

The evidence is coming from all sides. One of the most striking impressions last week was looking at the front Page of the New York Times while in Davos, and seeing two corporate giants hit by climate change, Coca Cola and Nike, lobbying governments for increased action. These companies very clearly see climate change as a risk to their business models, including their globalized supply chains.

Two key reports launched in Davos by the WEF Global Agenda Council demonstrate the widespread sense that climate change is a systemic risk to major corporations and entire economies — and show that it is also an opportunity, with the right corporate and government response.

The WEF council recognizes that 40 per cent of the top 10 risks to the global economy are linked to climate change. And it finds that current annual losses worldwide due to extreme weather and disasters could be a staggering 12 per cent of annual global GDP. The good news is that up to 65 per cent of the increase in projected economic losses could be cost effectively averted through preventive investments.

Climate leadership of major multilateral institutions was strikingly clear in Davos. World Bank President Jim Yong Kim highlighted 2014 as the year to take action on climate change and called for a $50 billion green bond market by 2015. Welcoming UN Secretary General Ban Ki-moon’s call for a climate summit in New York this year, he said that as a first step, key efforts should be made to double the green bond market to $20 billion by the time of the September summit. And he was equally confident from his conversations with investors that this is doable.

UN Secretary General Ban Ki-moon in turn called on investors to invest in low-carbon and step up transparency by disclosing greenhouse gas emissions. Remarkably, the only opinion editorial written by OECD Secretary-General Angel Gurría for Davos covered steps businesses and governments can take to completely decarbonize the economy, and the reasons we must do so immediately.

I am encouraged that climate change was elevated to its rightful place in Davos by both political and business leaders, with many concrete signs that businesses are keen to grasp the opportunities that arise from a shift to low-carbon.

For example, Torben Pedersen, the head of Pension Denmark, said his company’s investment in renewable energies like wind in Europe and North America equals 1,000 megawatts. That effectively offsets the emissions from meeting the energy needs of all of the 600,000 plus pension fund members of Pension Denmark. Torben Pedersen called on pension funds worldwide to follow suit and invest in clean energy, echoing the central message of both the UN Secretary-General and the Investor Summit on Climate Risk held in mid-January in New York.

As the world works towards a universal climate change agreement in 2015, increasing numbers of leading businesses are establishing a clear link between their actions and what urgently needs to happen at the policy level in 2014 for all nations and sectors to contribute to meeting the climate change challenge.

Nearly 50 per cent of the total emission savings can come from more energy efficiency, from energy efficient lighting to fuel economy standards for vehicles. Andrew Steer, President of the World Resources Institute, said that should the European vehicle emission standard for cars (95 grammes C02 per kilometre) be applied to trucks and the standard extended globally, this would go a long way to reduce emissions from transport.

Meanwhile, many businesses are taking concrete action, and tying this action into the big political climate picture. In Davos, Steve Howard, Chief Sustainability Officer of furniture giant IKEA, said that by the Paris climate conference in 2015, all of his company’s stores around the world will be lit by and will only sell super energy-efficient LED lighting.

Mindful of the UN Secretary General’s summit in September, Mr. Howard summed up another session saying that a global commitment to phase out HFCs, powerful greenhouse gases still used in refrigeration and industrial processes, would provide a good signal at the New York summit that can in turn help achieve a meaningful global climate agreement.

Dr. Arunabha Ghosh of the New Delhi-based Council on Energy, Environment and Water pointed out that many companies in India are already acting and developing alternatives to HFCs, and that attention is being focused on the challenge at the highest level of government.

This type of thinking and acting bodes well for 2014, and signals promise of a successful summit in September, a strong draft agreement in Lima and momentum that carries us to success in 2015. For the world to fully realize the potential of 2014, governments must have the backing of business and show maximum ambition.

Businesses, in turn, need policy clarity and predictability from governments. If Davos shows us anything, it is that we all have a role to play for the world to reap the vast social and economic opportunities of shifting towards low carbon and high resilience to climate change.

To see how climate action by businesses, cities and citizens continues to grow around the world, check out the UN Climate Change secretariat’s Momentum for Change initiative, showcases dozens of inspiring examples around the world.