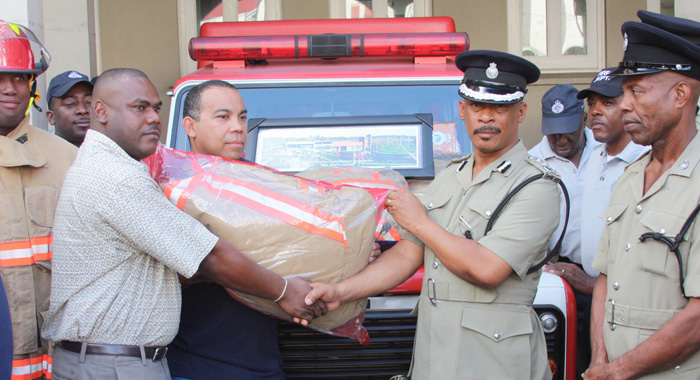 Deputy Commissioner of Police, Reynold Hadaway, said he is optimistic that the fire fighter suits donated will assist members of the fire department in delivering a higher level of professionalism.

At the handing over ceremony at the Central Police Station, in Kingstown, Hadaway said that notwithstanding the challenges brought on by the global economic recession, it is welcoming receive the C.K. Greaves & Co.Ltd and Ajax Fire Department partnership.

Hadaway reminded the gathering that fire fighting is a very challenging task and applauded the members of the Fire Department for their service.

Clyde Mofford, a manager at C.K. Greaves & Co. Ltd, said the donation is one avenue by which the company fulfils its corporate responsibility — by assisting the police needed equipment.

On average, a new fire fighter suit with headgear costs approximately US$1,200.

Don Carrera, Captain of the Ajax Fire Department, said due to changes in the United States and Canada standards for fire service, his organization had to change their fire fighting suits. He said the backup suits in stock used previously are the ones that were donated to St. Vincent and the Grenadines and they are “in perfect shape”.

Hadaway received a token from the Ajax Fire Department, while Assistant Commissioner of Police Frankie Joseph gave a plaque of appreciation to Bonadie on behalf of the Royal St. Vincent and the Grenadines Police Force.

4 replies on “Canadian fire fighters give suits to Vincentian counterparts”