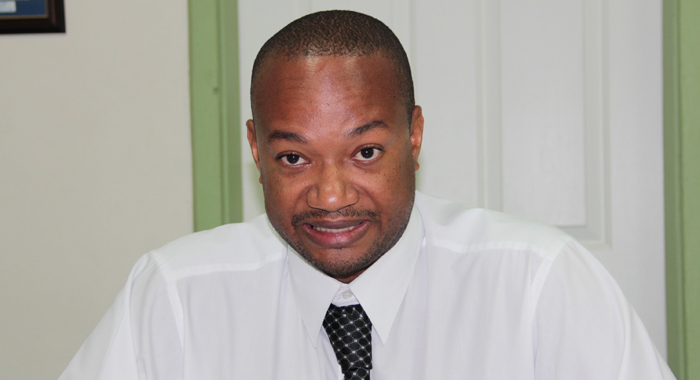 Grenville Williams is the second persons who is bidding to be the ULPs candidate for South Leeward. (IWN photo)

Director of the Financial Intelligence Unit, lawyer Grenville Williams, says he intends to be the ruling Unity Labour Party’s (ULP) candidate for South Leeward in the next general elections, constitutionally due in 2015.

“I am strongly persuaded to be the next representative for the people of South Leeward,” Williams told I-Witness News on Tuesday, one day after Sen. Jomo Thomas also announced a candidacy bid.

“I indicated my intention on a number of previous occasions and I herein reaffirm the commitment to be the person to make representations politically on behalf of all persons in South Leeward, on the ULP ticket,” Williams told I-Witness News.

“At this point in time, I believe I am a person who has been very involved in the community. I have developed a level of trust, confidence, and support of the people, and I believe, based upon those circumstances, I have the best opportunity, the best chance to win the seat on behalf of the Unity Labour Party.”

Williams emphasised his roots in South Leeward, saying, “I was born and bread in Lower Questelles; that’s where I lived most of my life. Now, I live on the other side of South Leeward, in Cane Grove.

In explaining why he thinks he is the best person to represent the ULP in South Leeward, Williams noted his work at the FIU and his involvement in the constituency.

“To date, I have been entrusted with a task that touches and concerns national security, a task which requires a person of strong integrity, a person who can make tough decision, even in challenging circumstances, a person who is a hard worker, a persons who delivers results,” Williams said.

He said that over the past 10 years, the FIU has delivered ”exceptionally well”, and noted the local, regional and international recognition the unit has received, and its status as a centre of excellence in the Organisation of Eastern Caribbean States.

“This centre of excellence has resulted significantly from my abilities as a leader, the ability to ensure that persons work together, ensure that there is a spirit of camaraderie, ensure that the goals that we set for ourselves, our mandate, is achieved. … I personally have received a number of awards, as well as the Unit, as a result of the work and the leadership,” Williams said.

Williams spoke of his involvement in sports, culture, community service, and disaster management in South Leeward.

“I could be specific but I prefer to just generalise them at this time.”

He, however, said he has been involved in football, South Leeward Carnival, the neighbourhood watch group in Cane Grove, which he heads, and the disaster relief efforts — not just as they relate to state resource.

Williams says he wants to contest the election on a ULP ticket because he believes that the ULP is “a party of progress”.

The 37-year-old man said Lower Questelles is “one of the most challenged communities” in South Leeward”, and growing up under the then New Democratic Party administration, many of his contemporaries didn’t graduate from primary school, in that they did not pass the Common Entrance.

“That is something that the Unity Labour Party changed. And for me that is something very significant and very important, because in all my experience, I believe that what makes the difference is providing opportunities for young persons to develop their minds, develop their skills. It took vision … for the ULP to make this change…

“I don’t want to get too political but I want to say I get a sense from the Unity Labour Party that they are a party of progress, a party willing to try, notwithstanding the odds.”

He said that he does not find Leader of the Opposition, Arnhim Eustace, “very inspiring”.

“And I am not simply repeating the rhetoric that is being thrown out. But when I have a leader of an entire country asking where am I going to get resources to do something, that does not inspire me as a young person,” Williams said.

“A young person wants to hear ‘There are possibilities, there are opportunities, and I will create those opportunities for you’ — not necessarily as the individual being the Opposition Leader, but working with others. You must be able to apply your mind in such a fashion that you can have a vision and create a path for our young people,” Williams further said, adding, “I believe that the ULP is a solution oriented party.”

Williams said that the Central issue for him in South Leeward and SVG, is greater job creation.

He said that the country is graduating a lot of skilled persons, while others are returning from universities overseas.

“For me, a man has the greatest dignity when he has coins in his pocket and he can pay his own way in life. I don’t think people want to be dependent on government and dependent on others.

“… So I believe the next revolution for St. Vincent and the Grenadines … is the jobs revolution. So, we create a lot of jobs for our people. It might not be high-level jobs but we have to look at employing more of the people. So, mass employment. That is what I want to see first for South Leeward,” Williams told I-Witness News.

He, however, said that citizens must also create employment for themselves, but added that the Vincentian culture has not been one where entrepreneurship is encouraged.

“And, we have to create an environment in South Leeward and St. Vincent itself where it is going to encourage people to become self-employed,” Williams said.

He, however, said this will require exposure to ideas, funding mechanisms, and technical assistance.

Williams said he will also focus on skills training such as electrical installations and repair, plumbing, and mobile device repair.

“There are a lot of little areas where we can have people trained. So, skills training is very important,” he said.

He further said that South Leeward has potential in tourism, and mentioned the Vermont Nature Trail, Table Rock, Questelles Beach and Buccama.

Williams said that while most Caribbean countries offer sun, sea, sand, South Leeward can offer “a cultural experience by doing something indigenous” to the area, like going on a farm in Vermont to cultivate or harvest with the farmers.

He said that many Vincentian children have not experience a donkey ride, but he has gone to international cities, where there are horse-drawn carriages.

Williams further said that South and Central Leeward can organise their own, or joint seafood nights.

Williams said that he did not want to comment too much on Thomas candidacy bid, but said he is willing to work with Thomas or former candidate and former senator David Browne.

“However, I would qualify that by saying that it does not mean that if they are selected I would not work with them. Because I believe it is critical, it is important that whoever is selected, that all ULPites, all persons interested in the progress of the country, work with that individual for the betterment of that community.”

He, however, said that constituents want somebody who is going to represent their interest.

“So, if they express a certain concern to you, you must give them hope and you must work diligently to try and resolve whatever issue that they raise,” he said, but added that potential MPs must be honest with constituents about what they can deliver.

Williams further said that when assisting persons, Politicians must not ask them about their political persuasion.