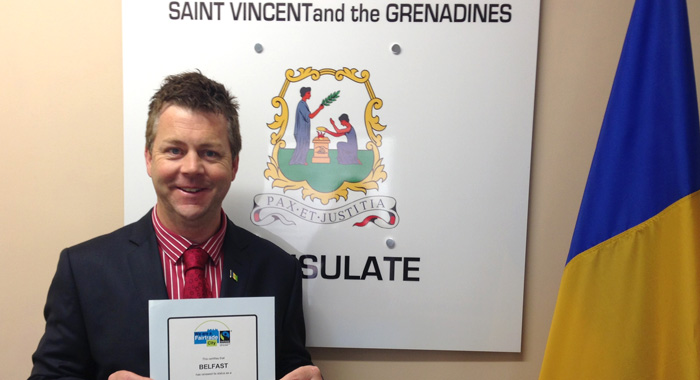 Christopher Stange, honorary consul of St. Vincent and the Grenadines to Northern Ireland and chair of Fairtrade Belfast with dual Fairtrade City certification.

The achievement came through the leadership and direction of Christopher Stange, honorary consul of St. Vincent and the Grenadines (SVG) to Northern Ireland and chair of Fairtrade Belfast.

Stange received the certificate at the Consulate for SVG.

Belfast was the first place to attain dual Fairtrade accreditation. The city gained Fairtrade City status in 2005 from the UK Fairtrade Foundation and in 2006 from Fairtrade Ireland.

Fairtrade is about better prices, decent working conditions, alleviating poverty and fair terms of trade for farmers and workers in the developing world. It enables them to improve their position and have greater control over their own lives.

“Belfast should be immensely proud as we near a decade of maintaining the Fairtrade status for the Capital of Northern Ireland. Fairtrade is providing a vital market for our Caribbean producers, especially our St. Vincent banana farmers, growing commodities we do not produce in Northern Ireland. Fairtrade guarantees a fair price for their efforts,” Stange said. “Look for the Fairtrade Mark and choose it with confidence when out shopping. You are making a real difference,” he further stated.

The Fairtrade campaign for Fairtrade Fortnight 2014 (February 24 – March 9) is highly relevant to the Caribbean as the theme is “Making Bananas Fair”.