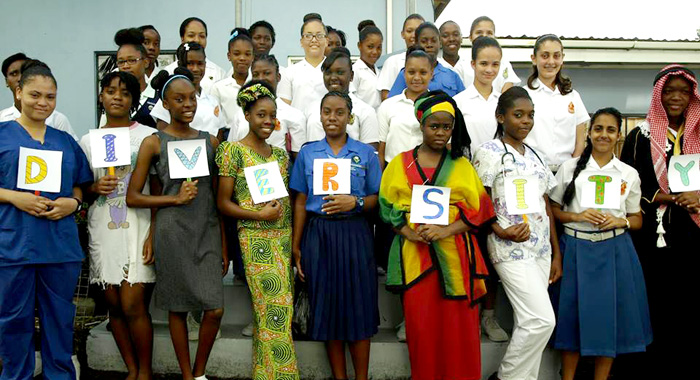 SJCK students at the launch of their Young Leaders programme.

“We believe that accepting and encouraging diversity is not only the Christian thing to do but it is also the right thing to do.”

These were the words that resonated at the St. Joseph Convent Kingstown assembly earlier this month as the Young Leaders launched their programme under the theme, “One vision, no division; celebrating diversity in the 21st century”.

The Young Leaders said an assembly type launch was chosen as the school is a religious institution. The programme included a thought, prayers and songs which were based on the theme “Diversity”.

President Michaela Miguel, on addressing the school body, explained further the concept of diversity. She said it is to accept respect and to understand that everyone is unique and to recognize our unique differences.

These unique differences, she stated, can be based on different dimensions of race ethnicity, gender, sexual orientation, socio-economic status, age, physical abilities, religious and political beliefs or other ideologies. It is the ability to explore your differences in a safe, non judgmental, positive and understanding society. It is the understanding of the uniqueness of an individual and embracing it.

Miguel also highlighted some of the advantages of embracing diversity.

These include creating an appreciation and respect of the similarities and differences among people; building a positive relationship with “different people” to enable togetherness throughout the society and persons being well-educated on the struggles to survive in an environment that is both unfriendly and intolerant and therefore move forward as an improved society and being able to encourage a culture that is different from ours.

This, she said, will result in our people being able to progress with one vision, no division and thereby celebrate diversity in the 21st century.

Miguel also reminded the teachers of their role in fostering diversity in the classrooms. These roles include, allowing time for students to learn about each other and gain an appreciation for the diversity they bring to the classroom, teaching students that everyone has strengths and weaknesses and implementing a “zero tolerance” for anything that is disrespectful, hurtful, or intolerant of diversity.

The Young Leaders’ later that day held a movie afternoon where the film Hotel Rwanda was shown. This film tackles the issue of ethnic division and shows how division can destroy an entire society.