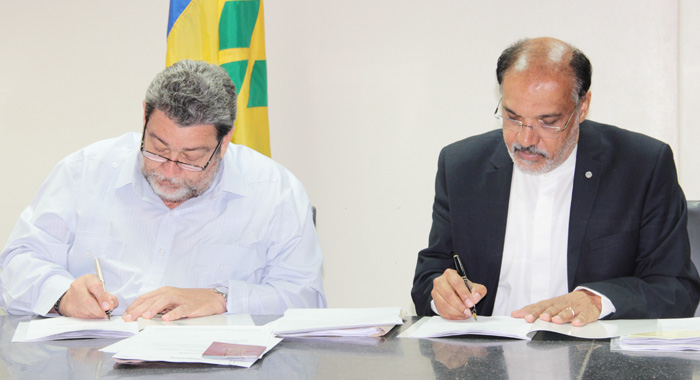 The Food and Agriculture Organisation (FAO) this week presented a grant of US$320,000 to the government to go toward the rehabilitation of the most affected, the most vulnerable, and the most viable areas of the agricultural sector.

The monies were donated as the recovery from the Christmas floods continues.

A trough system on Christmas Eve left EC$330 million in damage in St. Vincent, including EC$8.4 million in damage and loss to the agricultural sector. Nine persons also died and a further three are still missing and presumed dead.

J. R. Deep Ford, the FOA’s regional co-ordinator for the Caribbean, said that the agency hopes for the rehabilitation and rebuilding of livelihoods, damaged and undermined by the weather.

“But very importantly, we also want to rehabilitate and rebuild the resilience that must be there for the next event. It is very critical that while we focus on probably close to 1,000 farmers [and] inputs, we look at the poultry sector, we look at the pig sector, that we are also importantly focusing on the forested areas of the country,” he said.

Ford said that the FAO recognises the need to clean and clear riverbeds that contributed immensely to the damage that took place during the extreme weather.

“We must be rehabilitating and fortifying riverbanks, which are important. Also, the steep slope must be stabilised and forest roads must be cleared.”

Ford said that the FAO was looking at additional contributions to St. Vincent after the extreme weather and has approached some of its bilateral and collaborating agencies.

“So we are also hoping that in the very near future we will be announcing some additional funds in addition to this US$320,000 that we are going to be putting on the table today.”

He said he would like to make the link with sustainable development and that the funds not only rehabilitate but also contribute to the growth and development of the economy.

He said he had spoken to the Ministry of Agriculture about the importance of targeting specific areas and specific farmers to become a part of dynamic development.

“And they will grow with this stimulus the government of St. Vincent and the Grenadines is putting in and with the supplementary and complementary assistance from the FAO. We are putting on the table financial resources, technical resources, but very importantly the long run support of the FAO at the disposal of the government and the Ministry of Agriculture,” Ford said.

He said that in addition to the grant, the FAO is working with the forestry department to strengthen that agency and build resilience.

“So while we are focusing on a particular grant for rehabilitation after the heavy winds and rains, we are continuing the platform of work, the strategic vision that we have laid out for the Caribbean sub-region as a whole, of which St. Vincent is a very important part of that work.

“So we are continuing the food security work, the rural poverty work, the resilience work, the inclusion work, and we a new initiative which we are pushing, a food and feed expansion, which addresses the food import bill as well.

Meanwhile, Minister of Agriculture, Saboto Caesar said that the monies will be “available for the most vulnerable, for the most susceptible”.

He, however, noted that a significant part of the state-owned hatchery, the nation’s only such facility, was damaged by lightning during the extreme weather and some of the funds will go to its repair and also to “ramp up production and productivity at the stations”.

“It would have been good if the government had a thousand cows or 500 cows to help some farmers right away, but those are not the numbers we have on our station, so we are going o use some of the money to help with the infrastructure work so that we can reproduce more on the stations,” he said.

He further urged patience among livestock farmers, noting that it will take time for the government to replenish its own stocks.

Caesar further said that the Caribbean Development Bank and the Inter-American Institute for Cooperation on Agriculture have each pledged US$20,000 to the agriculture sector, and the Ministry of Forging Affairs is soliciting help from friendly governments.

Prime Minister Ralph Gonsalves thanked the FAO for the donation, but pointed to the scope of short-term activities identified in the FAO’s report on the damage resulting from the extreme weather.

“Now, all these short-term activities, $320,000 can’t cover all these things. And I am very heartened to hear Dr. Ford say that there would be other resources forthcoming,” he said.

“The FAO can’t assess this, say this is what we need short-term, and then just $320,000…” Gonsalves said, but added that the grant is “an important contribution”.