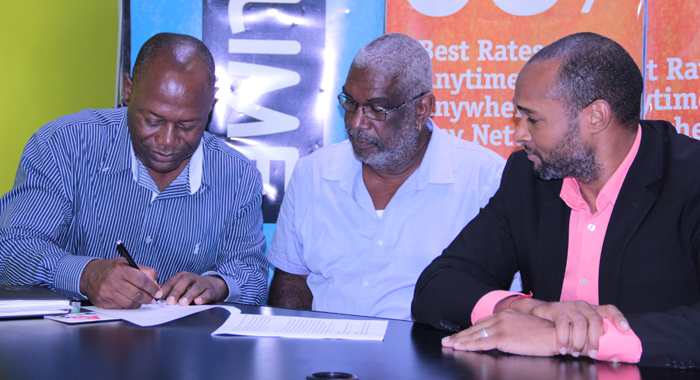 CEO of the CDC, From left: Ashford Wood, Chairman of the CDC, Denis Ambrose, and Manager of LIME, Leslie Jack, at the signing ceremony. (IWN photo)

Neither LIME nor the CDC disclosed the value of LIME’s agreed contribution to Vincy Mas 2014 and 2015 when they signed the new contract at a recent press conference.

Leslie Jack, manager of LIME, said that the company does not want to disclose the value of the contract yet.

“We do know persons out there are looking to take a bite into it, so, we would not want to disclose that at this time,” he said.

“But just to say that we will be certainly maintaining, and in some areas, expanding partnerships that we have for Carnival. What you do not expect is for us to provide any less value than we have been providing over the years,” Jack further said.

Ashford Wood, chief executive officer of the CDC, said that LIME is a “super platinum sponsor” of Vincy Mas.

He, however, said he would prefer, “at this stage”, not to disclose the value of the contract.

The “super platinum sponsor” status means that the combined value of LIME’s contribution to Vincy Mas, in cash and kind, will be no less than EC$100,000 for each of the next two years.

The figure is EC$30,000 more than a company had to contribute last year to be a super platinum sponsor.

Speaking at the ceremony, Wood said

LIME has been partnering with the CDC for number of years and the CDC is extremely pleased with the partnership.

He said LIME is not just a good partner in CDC events, but has also sponsored many of the rural carnivals as well as mas bands, and hosts its own shows around Kingstown.

Wood further said that LIME remains host of one of the largest advertising bands on Carnival Monday.

“It is obvious that their involvement is far reaching,” Wood said, adding that Lime is a good corporate citizen not just to carnival but to the community at large, as demonstrated in the recent floods.

Meanwhile, Jack said LIME is pleased to be part of carnival and this year, the company will conduct its activities under the rubric “LIME 4G Carnival”.

He said LIME’s 4G — the fourth generation of mobile phone mobile communication technology standards — will be launched in April and customers can expect a number of 4G-related activities.

Jack said LIME has had an excellent relationship with the CDC and is pleased with the progress made and plans for Vincy Mas this year.

He said that this year, LIME will have a mobile app, which will disseminate information about LIME-sponsored events, and previews of the major music launched during Vincy Mas.

Jack said LIME is looking to see how they can stream some CDC-sponsored events its 4G handsets.