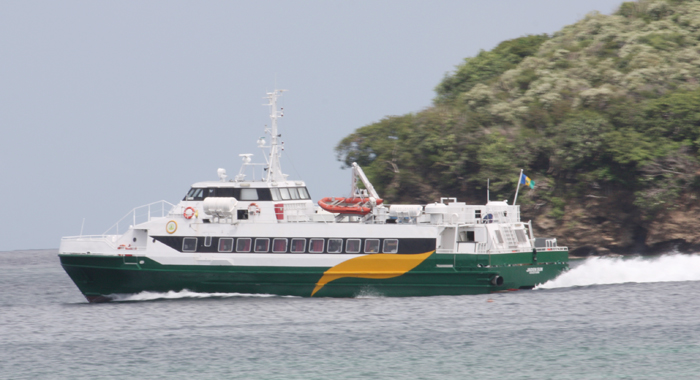 The government has granted a US$100,000 loan to the owners of the “fast ferry” — MV Jaden Sun — to replace a damaged engine, which had caused services to be suspended until further notice.

Prime Minister Dr. Ralph Gonsalves made the announcement at a press conference on Monday, where he also announced concessions on fuel for all passenger ferries operating within St. Vincent and the Grenadines (SVG).

Gonsalves noted that Jaden Sun takes two hours to sail one-way between Kingstown and Union Island, a six-hour journey on the other major carrier, the MV Barracuda, which, unlike Jaden Sun, carries cargo.

Gonsalves said that sea transport is expensive to this multi-island state.

He said that figures indicate that for a round trip between Kingstown and Union Island, some 96 nautical miles, Jaden Sun burns EC$6,000 worth of fuel.

The owners of the Jaden Sun were losing money even when the ferry was operational, the Prime Minister said.

“They ran into problems, they were losing money and they had to buy a new engine because one of the two engines was down,” Gonsalves said.

He said he invited the owner of the vessel, Elvis Gooding, to a meeting last year to discuss ways in which the government could assist.

Gonsalves said that the proposal was circulated to the relevant members of Cabinet, but action on it was delayed because of emphasis on the relief effort after the December 2013 floods.

The Cabinet has since agreed to give duty free concession on the fuel used by all ferries that carry passengers within St. Vincent and the Grenadines.

“Of course, the fuel has to be bought through the bonded warehouse system, so that you have a reputable dealer you are dealing with. That will save the fast ferry just over $1,000 a day,” Gonsalves said.

Public servants and students will use the ticket, which will be bunched.

Gonsalves said that because the ferry was losing money, it would have been difficult for the operators to go to the bank to seek a loan to replace the engine.

Further, such a loan could have attracted between 10 and 12 per cent interest per annum.

The government has agreed to lend the ferry operators US$100,000 at 4 per cent interest per annum over 10 years, with two years grace.

Gonsalves said that a similar offer is open to Jeffery King, owner of Barracuda, which, he said, had to replace one of its two engines and two gearboxes recently.

“But if he wants it (the loan) next week, if he wants to go and buy it (engine), I will facilitate it,” said Gonsalves, who is Minister of Finance.

The monies for the loan come from PetroCaribe, the oil alliance of some Caribbean states with Venezuela to purchase oil on conditions of preferential payment.

“We have done a lot of work in the Grenadines. … But when you see a government goes out of its way like this and acts in this manner concerning an issue of transportation — sea transportation, you know that this is a government which wants to see our multi-island state to be one always, and the links must be solid,” Gonsalves said.

He added: “Now, hopefully, we would not see the rapid increase in fares that we have been seeing in some of the ferry services.

“[I] don’t think anybody can complain about this reasonably,” he further said in reference to the assistance given to the ferry operators.

“I think it is a good use of government resources to help with something which is of vital importance to us, in the same way that we use resources to help St. Vincent link with the rest of the region through [regional airline] LIAT.