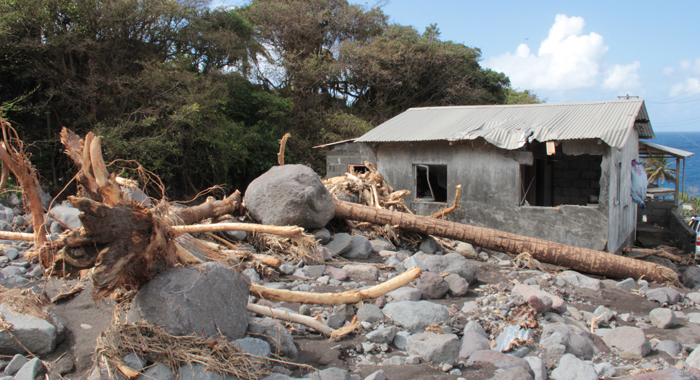 Some 662 houses were damaged in the Christmas Eve floods. (IWN photo)

The project will address houses with Levels 1, 2, 3, and 4 damage, with Level 1 representing houses with minimal damage, while Level 4 means that a house has to be rebuilt elsewhere.

The government is also trying to accommodate some persons whose situations were not addressed fully, or at all, after Hurricane Tomas in 2010 or the floods of April 2011, Gonsalves told a press conference on Monday.

Gonsalves said that distribution of material to owners of homes with Levels 1 and 2 damage had begun.

The process has also started in relation to Level 3 damage, and heavy-duty equipment was in Fitz Hughes clearing land for housing.

But Gonsalves said that he wants to see a similar process implemented simultaneously everywhere there houses are to be rebuilt.

He said that for every house that is to be built, a contract should be awarded and work will commence.

“We can’t do something by having one contractor doing the houses in just one area and building them over a longer period of time. I want the work to be done as quickly as possible through different sets of contracts,” Gonsalves said.

He said while it would be better for contractors from a particular community to build the houses in that area, this will depend on the level of technical support and work force of the contractor.

The government is “strengthening the capacity” at the state-owned Housing and Land Development Corporation and Gonsalves, who is also Minister of Finance, said he had asked that the acting Deputy Accountant General, be assigned to the agency.

“It is a hybrid mechanism addressing this housing programme, between the Ministry of Housing — central government, and the Housing and Land Development Corporation.

“It is not directly under the Housing and Land Development Corporation but you are using the institution to effect certain things,” Gonsalves said.

The Prime Minister further said he has identified resources for persons affected by the storm to receive furniture, crockery and cutlery.

“And that is the next venture which we are hoping to embark upon very soon through that same committee,” he said.

Gonsalves told Parliament, in January, that actual material damage to 662 houses during the passage of the trough system on Christmas Eve is estimated at EC$24.6 million.

Assuming that a relocation of 300 of those houses is to be done, the cost of damage to the housing sector would be an estimated EC$45 million, he said in his Budget Address.