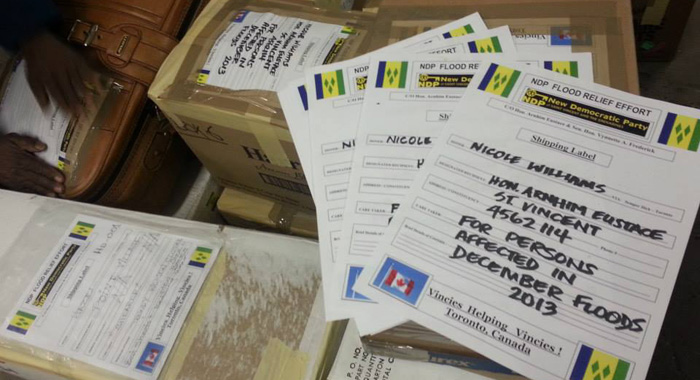 Some of the items shipped from Canada to the NDP. (Internet photo)

The opposition, New Democratic Party (NDP), says that the public has pledged in excess of the EC$20,000 needed to pay the value-added tax and other duties on disaster relief items sent to the party by Vincentians in Canada.

The office of the Director General of Finance and Planning had initially approved duty-free concessions for the some 45 barrels and boxes containing the items.

However, Cabinet did not approve the waiver.

The NDP raised the money during a radio programme Tuesday night, to which members of the public called in pledges of various amounts.

The party said that its president, Leader of the Opposition, Arnhim Eustace, in a call at the beginning of the programme, condemned the actions of the government in denying the NDP duty-free concession on relief supplies.

Eustace accused the government of wanting to profit from the humanitarian aid sent to the NDP for distribution to persons affected by the December 2013 floods.

He said that EC$20,000 was estimated to be needed to cover the duties and taxes attached by government to items shipped to the NDP.

Eustace also noted the generosity of St. Lucian shippers, KLC, who shipped the items to St. Vincent free of cost, the NDP said.

The party said that pledges came from across St. Vincent and the Grenadines, the United Kingdom, Canada, the United States, Tortola, Anguilla, Grenada and Taiwan.

Pledges were also made via email, text messages and social media.

At the end of the programme, Eustace again telephoned thanking the donors “for their determination and assistance rendered to ensure that nothing will stop relief items from the diaspora from reaching those persons who need it most in the affected communities,” the NDP said.

The NDP has refused to conduct its disaster relief effort through the National Emergency Management Organisation, a state agency that it has accused of being partisan in the distribution of relief items.

The government has said that duty-free concessions would not be granted to the NDP if it refuses to work through NEMO.