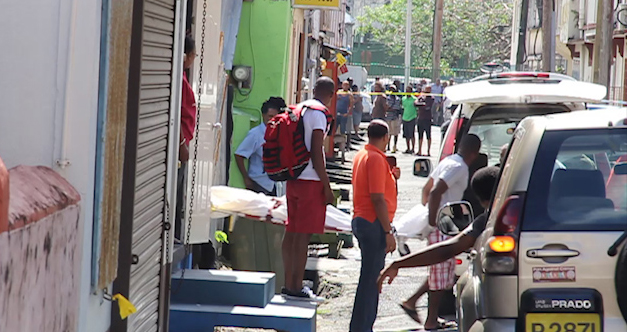 The body of Kwesi Ryan is removed from the scene in Paul’s Avenue on Monday. (IWN image)

A Paul’s Lot mother says she held her hand over a gunshot wound to her son’s chest and felt the final beats of his heart as he died after being gunned down by a masked assailant on Monday.

“I can’t explain to anybody how I feel,” Brenda Ryan told I-Witness News after police removed the body of her 24-year-old son, Kwesi Ryan, from her yard in Paul’s Lot, where he was killed.

“He died in front of my eyes. I can’t explain to anybody how I feel,” said Ryan, who, like her son, were trapped against a galvanize fencing as the gunman repeatedly fired.

Ms Ryan was not injured in the attack.

Kwesi was on EC$30,000 bail in connection with the Jan. 30 daylight robbery of an employee of an insurance company in Kingstown

Belle is in jail on remand and a preliminary inquiry is slated for June 2 and 3.

“I really can’t say if his death is connected to that…” Kwesi’s father, Maxim “Gurkie” Ryan told I-Witness News.

Mr. Ryan, however, said Kwesi had told him of the gun attack in January.

“When I heard that, I came and I talked to him. I told him to stay at home — keep from off the road. But every Monday and Friday, he has to report to the police station, because he is out on bail, … so I guess whoever wanted him dead took the opportunity…” Mr. Ryan told I-Witness News.