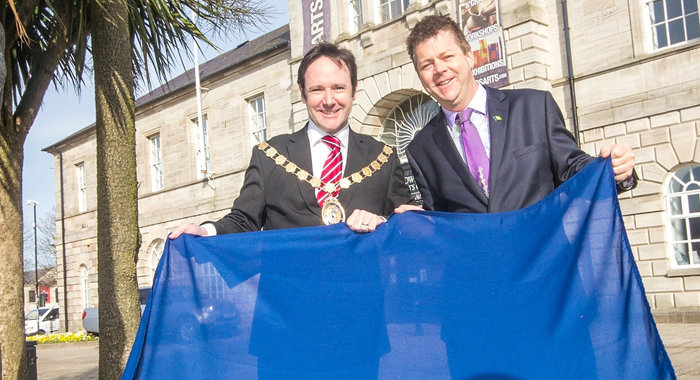 Dr Christopher Stange, Hon. Consul for St. Vincent and the Grenadines to Northern Ireland, right, and Councillor Stephen McIlveen, mayor of Ards with the Commonwealth Flag.

NEWTOWNARDS, Northern Ireland — The Consulate for St. Vincent and the Grenadines to Northern Ireland, Christopher Stange, and the community “made history” on Monday (Commonwealth Day) when it joined 500 other communities across the UK, Channel Islands and Isle of Man in raising the Commonwealth flag in Newtownards.

Mayor of Ards –Councillor Stephen McIlveen, was joined by Stange for the flag-raising ceremony.

“This was a simple, yet very visible demonstration of our support for the Commonwealth’s shared goals of democracy, development and respect for diversity and I was privileged to be able to raise the flag in the company of Dr. Stange and at the same moment as hundreds of other communities across the UK and the 53 countries which form the Commonwealth,” McIlveen, said.

“It has been a privilege to be involved with Ards Borough Council to commemorate Commonwealth Day. SVG is one of the few remaining Commonwealth Realms with the Consulate based in Comber,” Stange said.

“History, culture, shared values of human rights, democracy and rule of law unites the 53 member states. We look forward to the Commonwealth Games this year in Glasgow, building upon the long standing relations between St. Vincent and the Grenadines and the United Kingdom.”