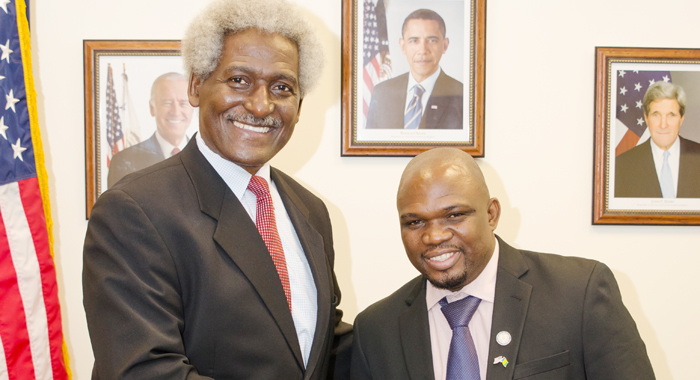 Harry is a member of Royal St. Vincent and the Grenadines Police Force.

He will take part in a two-week project on international crime issues with 23 other candidates from around the world.

The participants are a diverse group hailing from as far as Liberia, Tunisia, Mali, Comoros, Albania, and Chile, and are united by their professional pursuits.

“The programme offers the opportunity for this varied group to network with professional counterparts (both U.S. and international) in order to increase information sharing,” the U.S. Embassy in Barbados said in a release.

Harry’s participation in the programme will examine the U.S. criminal justice system and the role of the federal government in fighting terrorism and other international crimes and building international coalitions and broad anti-crime partnerships.

In addition, Harry, along with his colleagues, will participate in a discussion where a panel of experts from a leading think tank will address evolving terror and criminal threats to the world community and also discuss balancing national security interests with civil liberties.

The programme, which begins on April 20, will open in Washington, DC, which is home to the key federal agencies and private organizations with the mission to combat international and organized crime in both the United States and abroad.

It will include travel to at least four cities across the United States.  The national itinerary will also include travel in smaller groups on city splits to Denver, Colorado; Portland, Oregon; San Diego, California, and will conclude in New York on May 2.

The IVLP is the Department of State’s premier, professional exchange programme.

The programme brings together emerging leaders in their respective professions to learn how U.S. experts in that profession operate and to share best practices with the other programme candidates who hail from the same region and across the globe.