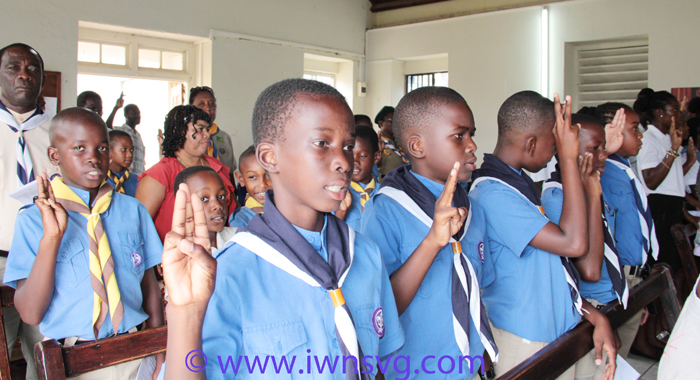 The Scouts Association of St. Vincent and the Grenadines on Thursday celebrated their centenary with a church service and commitment to “rebuild on the values and principles of the scout promise and law”.

The pledge by recently warranted Chief Commissioner Adrian Wyllie came as the Scout Movement begins to recover from allegation of homosexuality involving some scout leaders a decade ago.

Scouting internationally does not accept openly gay members or leaders.

The poor turnout at the service at the Georgetown Methodist Church is said to reflect the low membership the scout Movement locally, which recently held investiture ceremonies for at least two Cub Scouts packs.

Wyllie spoke of the growth of Scouting in SVG and noted that the country became an official member to the Scout world body, with full voting rights, in 1999.

“It is ironic that as we celebrate our greatest achievement as a NSO we face what may seem our greatest challenges,” he, however, said.

Wyllie said that Scout membership in SVG has declined significantly and he Movement struggles to source the requisite human and capital resources to operate efficiently.

“However, we are not fazed. We have chosen our theme ‘Rebuilding the movement 2014 and beyond’. We know how important this movement is in helping to create a brighter and better St. Vincent and the Grenadines.

“We will not despair, but rebuild on the values and principles of the scout promise and law. Virtues that are as relevant today as they were 100 years ago,” he said at the service at which the Scouts present reaffirmed the Scout Promise.

Wyllie, however, said that the leadership of the movement cannot rebuild singlehandedly.

“We need to partner with all stakeholders. We realise that the image of the movement has been tarnished by past transgressions and trust has been eroded. But on our honour, we promise that we will do what is necessary to restore our image and rekindle that trust,” he said, echoing the first words of the Scout Promise.

In his sermon, Rev. Pierre Claudel Zephyr of the Methodist Church noted the Bible story of Nehemiah and the challenges he faced in rebuilding the walls of Jerusalem.

Zephyr said that the Scout Movement must be prepared to stand with courage.

“Rebuilding is possible. All that is needed is a strong mind,” he said.

He urged the Scout Movement to tell the youth that there is a bright future ahead if they conform to the good discipline that the movement instils.

Chief Commissioner of the Girl Guides in SVG, Rechanne Browne-Matthias, brought greetings on behalf of her organisation, which is also celebrating its centenary this month.