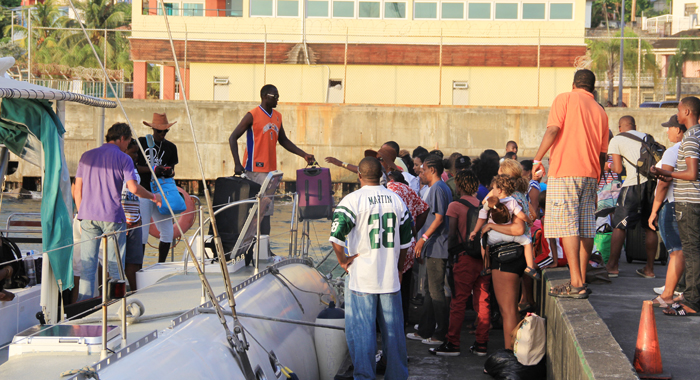 Passengers disembark a catamaran that ferried them from Union Island to Kingstown on Monday. (IWN photo)

The Union Island Easterval Committee (UNEC) this year had the added headache of transportation to and from the island, in addition to the recurring challenges of lack of funding, limited capacity, and private promoters who threaten the success of one of their main moneymaking shows.

“Based on our circumstances this year, with all of the transportation problems with the airlines and the boats, I am satisfied,” head of the UIEC, Abdon Whyte, told I-Witness News shortly after the Miss Easterval pageant in the pre-dawn hours of Monday.

“It was a tremendous task and the committee worked very hard in putting all of this together and it could not have ended with a better way with Miss Union Island bringing back the crown after we not winning the crown for a number of years. That makes us feel really good,” Whyte further said.

The attendance at the Soca Fest on Saturday night and the Miss Easterval pageant on Sunday showed marked year-on-year decline.

With two of the main ferries travelling to the Southern Grenadines out of service, hundreds of persons struggled to make their way to and from Union Island on the weekend.

A vessel that advertised an extra trip for Saturday, did not make that run, and another vessel, which carries mainly cargo, charged EC$70 one-way to Union Island, $10 more than the fare that passenger vessels normally charge.

The express ferry takes just 90 minutes to sail the 40 nautical miles between Kingstown and Clifton, and a regular ferry normally takes between 4 and five hours.

However, persons travelling on the vessel on Saturday left Kingstown shortly after 1 p.m. and arrived in Union Island around 8 p.m.

On Monday, as news broke that a ferry scheduled to from Clifton to Kingstown would sail at 4 or 5 p.m., rather than the advertised 12 noon, some persons became worried, until word began to spread that a catamaran was available at 1 p.m. to take 60 persons to Kingstown, at EC$60 per persons.

Two catamarans — one of which was said to have been chartered — arrived in the nation’s capital shortly before 6 p.m. Monday, afternoon, carrying at least 60 persons each.

Whyte said that persons travelling to Union Island for Easterval normally want to travel with Barracuda, the main passenger ferry to the Southern Grenadines, and the express ferry, Jaden Sun, because they get to the island faster.

He said that those ferries are out of service and while Gemstar, another ferry, put on some extra runs, “the transportation issue affected us a lot this year”.

“Easter is a national festival and I think it’s time that the airlines put on extra flights,” he said, adding that people were inquiring about the availability domestic flights to and from Union Island.

“Something needs to be done in terms of solving the transportation issues,” Whyte told I-Witness News.

“I don’t know if government needs to become more involved, whether by subsidizing, especially during the Easterval festivities, but something needs to be done to correct the transportation issues that we have, because Union is very far from the mainland and with all the other challenges that we face, I personally won’t like to be dealing with or having the headache of not having adequate transportation.”

Whyte told I-Witness News that he has spoken to Director of Grenadines Affairs Edwin Snagg and the vommittee approached Gemstar and negotiated extra trips.

“But hopefully, myself and director Snagg and other members of the committee, we can sit, probably as early as next month and really look at what went good this year, what went bad, and how we can better the situation.

“I have always said that persons in the community, whenever they are in a position, they need to use that position for the betterment and the upliftment of the community and we need to put personal differences aside,” Whyte further said.

He told I-Witness News there were  “some little hiccups” in getting some things, and noted that the committee is a voluntary one and some members took annual vacation to help organise the festival.

“And where there are facilities and resources in the community that we can use and because of whatever difference, — I want to choose my words correctly — … whether we like someone or not, whether we are Christians or we don’t support Easter, we need to put these things aside,” Whyte said.

Whyte told I-Witness News that after Christmas, Easterval is the biggest celebration on the island.

He further said that more persons come to Union Island, whose economy depends mainly on tourism, during Easterval than during the best month of the tourism season.

“It is an economic stimulus to the island and persons really need to look at Easter in a different light, especially persons on the island and how really and truly it is benefitting.

“But government really needs to do something in terms of pumping a little more money into Easter,” he further said, adding that the Grenada government paid for two boats from St. George’s to Carriacou, when Carriacou had its carnival.

“Government cannot continue to leave the running of the festival (Easterval) up to a small committee, because the potential for tourism is there, the potential for a number of things –development of culture and sports, and a whole heap of things.

“And government really needs to get involved, whether it’s training members of the Easterval committee in managing events, whether it is capacity-building or investing more money in the festival, but there needs to be greater input,” Whyte told I-Witness News.

But while the attendance at the main Easterval celebration this year showed marked decline, I-Witness News understands that Bequia saw an upsurge in visitors from St. Vincent during the Easter weekend, when the island, located nine miles from St. Vincent, held its regatta.

A return ferry ticket to Bequia cost about EC$50, at least $10 less than a one-way ticket to Union Island.

Whyte said that Bequia has an advantage because of its geographical location.

“But I think what we have to offer here in Union, the whole vibes, I think it is totally different, the Miss Easterval pageant is a great pageants, but a lot of money is being pumped into Bequia and because of all of that and the location of Bequia, it puts Bequia in a better situation than us.

“And that’s why I think it is necessary that everyone on Union Island — I am not talking about government alone — we need to sit, we need to look at how we can make this festival bigger.”

But Whyte noted that private promoters continue to be a challenge.

“We can’t continue to compete with private promoters. It takes a lot of money to organize the festival. And we gain our money from the two major events, the Soca Fest and the Easterval pageant.

“And if we continue to compete with private promoters, especially on soca fest night, it is going to put us in a position where we will not be able to pay our bills,” Whyte said.

The Soca Fest began at 2:12 a.m. Sunday — three hours after the scheduled time — as the Easterval committee waited for patron to arrive after another fete staged by private promoters.

“I think private promoters, it is important that they are part of the festival, because they help to enhance and promote certain aspects of the festival that the committee itself might not be able to do, or might not be able to do it as well as they may, but there needs to be some sort of structure or some sort of order,” Whyte told I-Witness News.

The Easterval celebrations have taken the same format for more than 20 years, and Whyte told I-Witness News that while he thinks that the format is working, “things can be done better”.

Whyte, a teacher, is into his third year as head of the committee, which has internal elections every four or five year.

Some patrons at the Easterval activities told I-Witness News that they think that the committee needs to be revamped.

“I don’t want to say we need some influential persons on the committee — we also need some serious persons who are committed to working. And once we have that, we can really take it to the next level; but I think our major issue is finance,” Whyte told I-Witness News.