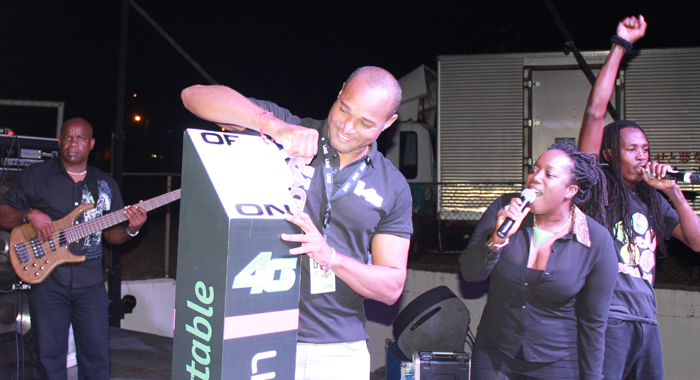 General Manager of LIME Leslie Jack flips the 4G switch as Marketing and Corporporate Communications Manager Nikala Williams does the count down.

Fresh on the heels of its unveiling of its 4G network to corporate partners in St. Vincent, telecommunications provider LIME unleashed the highly anticipated system to the Grenadine island of Bequia in fine style.

Residents and visitors who were on the island for last weekend’s Easter Regatta were treated to a 4G launch party, at the Clive Tannis Playing Field, with some of the country’s most versatile entertainers in attendance.

The band Kinetic warmed up the packed court with an energetic performance from its front man Akido Foster, who prepared the audience for what was to come.

Then it was the LIME 4G Ambassadors (DJ Fugitive, Pit Bull, Chemical X, Hypa 4000), as well as the LIME Soca Dans, which includes Fireman Hooper, Shaunelle McKenzie, Luta and DJ Q, who thrilled the crowd with their past and present hits, including Luta’s well-received 2014 track,  “Til Morning.”

Barbados based band Soca Kartel, accompanied by compatriot Biggie Irie also got in on the action, with performances that had the crowd begging for more, as they let loose with a number of original tracks as well as a medley of top West Indian music from their repertoire.

The Bequia 4G experience also saw General Manager Leslie Jack, after a short countdown, throwing a switch that heralded the presence of 4G — faster mobile connectivity that the company can says only be experienced on the LIME network.

Throughout the weekend, patrons were also treated to deals on 4G ready handsets, double bubble, and other deals and incentives from LIME.

LIME says it has 11 4G sites up and running — from Buccament Bay on the Leeward side to Stubbs on the Windward side.

The company further says that it anticipates having the rest of the country completed over the next two weeks.

To celebrate their island wide 4G launch, LIME promises another thrilling experience at the big FREE 4G Fete in Victoria Park on May 16.

One reply on “In Bequia, LIME launches 4G with fete, fireworks”