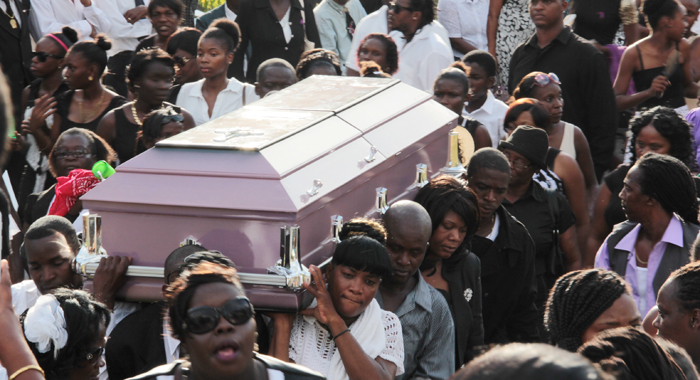 Murder victim Miranda “Wiggy” Williams was buried on Saturday with police yet to charge someone with her death, although a passing driver is said to have seen the man who is believed to have killed her two weeks earlier.

The 34-year-old mother of two was last seen alive some 200 yards away from her home in Rillan Hill around 10 p.m. on April 11 and is believed to have been abducted then killed.

Police say she was shot in the chest in Penniston, a neighbouring community, around 11:50 that same night, and her body was discovered early the following morning.

Her death is said to be an example of the power that some men feel they can wield against women who exercise their right to choose their partners.

The inability of police to charge someone almost 10 days after they took a suspect into custody illustrates how fear of reprisal can allow killer(s) to go free — and possibly kill again.

I-Witness News understands that moments before Williams was shot, she banged on the bonnet of a passing vehicle, telling the driver, “Please help me, please help me; he is going to kill me.”

The driver is said to have also seen a man approaching with a shotgun and was afraid that he too would be killed.

When he had driven a few yards, he heard the gunshot that is believed to have ended William’s life.

The witness is said to be afraid to attend an identification parade, because police here do not have one-way mirrors that would prevent those in the line-up and the witness from seeing each other.

“I can see from the love that she has in the community that she had a humble and contrite spirit,” Williams’ co-worker said at the funeral service at the Rillan Hill Church of the Nazarene.

“Miranda was sweet; she was always smiling. When she came to work late, she just smiled. What could I have done when she was smiling,” Shallow said in her tribute to the mother of two — a 12-year-old son and 5-year-old daughter.

Sudamo Toby eulogised Williams as a woman who was quiet and dedicated to her children, but always ready to defend her own mother.

Toby, who had to pause to contain himself twice during the brief eulogy, remembered Williams as the person who had given him his the first five shirts to wear to work when he got his job.

He, however, said she insisted on paying him when he honoured her request for two pairs of shoes from overseas sometime later.

“Her body may be here, but Miranda’s spirit will always be with us,” he said as he struggled through tears to utter the final, indiscernible words of the eulogy.

Williams was buried at the Chauncey cemetery after a funeral march that included dancing, singing, and steel pan and boom-drum music.

Her casket was carried shoulder high for the last few hundred yards to the cemetery.

5 replies on “Murder victim Miranda Williams begged to be rescued”