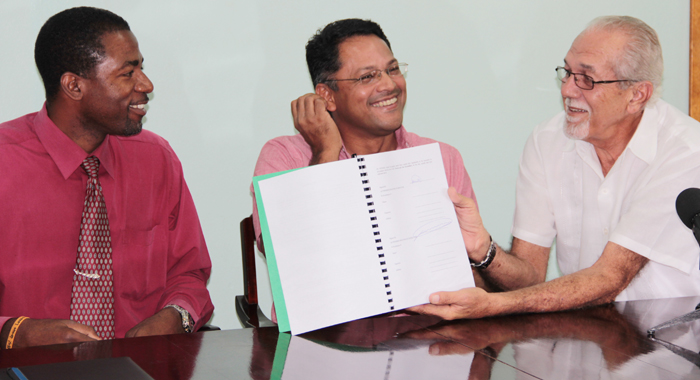 Actual physical work on the South Leeward Highway will begin in June, and will see major improvements to the road network, including flood prevention measures near the Milton Cato Memorial Hospital in Kingstown.

But transport officials have also warned that there will be major disruptions, and have advised commuters to leave home as much as one hour earlier than normal when the work begins.

“We know that the South Leeward area is very limited in terms of the road network, and as a consequence of improving this important piece of infrastructure, there is going to be inconveniences,” Hudson Nedd, permanent secretary in the Ministry of Transport and Work, said at a ceremony on Friday.

During the ceremony, Dipcon Engineering Services Ltd. and the government signed an EC$25.15 million contract for the rehabilitation of the 11.4 kilometre (7-mile) highway.

The work is expected to last 21 months, and the government says it will hire Marlon Stephenson as community liaison officer.

Some 160 persons are expected to be employed on the project, including up to 10 foreigners.

Brent Bailey, chief engineer in the   Ministry of Transport and Works, gave an overview of the project, saying the rehabilitation is “very critical project”.

It will see the road between Kingstown and Layou upgraded to a carriageway of between 6 and 6.4 meters (19.9 to 21.12 feet), and will include the installation of drains, retaining walks, and sidewalks.

Some wards of the Milton Cato Memorial Hospital were flooded during the rains last December, and Bailey said further changes will be made to the works which were planned before that weather event.

“… it needs further improvement, because with the new rainfall parameters that we have faced, we have to look at building our structure, especially where the hospital is concerned, bigger, stronger, more resilient so that we can avoid the events of 2013 and moving forward.”

Two 1.5 metre (4.95 feet) diameter culverts will be constructed to take water from the highway to North River.

“When we are actually doing that work, there will be significant diversions and we will have to have the public’s cooperation,” Bailey said.

In “Shuffler”, Questelles, where a section of the road close to an embankment has sunken and is prone to earth movement, the road will be shifted to the upper embankment.

Those areas will have “serious diversions,” Bailey said, but added that at all times, the contractor will attempt to ensure that there is one lane available, and have traffic coordinators.

In Campden Park, at the junction leading toward the Industrial Estate, the road will be widened to facilitate containerised traffic travelling toward the Leeward side of the country.

“That area is going to be widened, significantly adjusted. The road profiles will be changed in those areas. There will be sidewalks as well provided for the children going to the Lowman’s Anglican Primary School,” Bailey said.

There will be improvement at the gap to “Big Bush” in Rillan Hill.

Meanwhile, Minister of Works Sen. Julian Francis said that one lane of the road must be opened at all times during the construction.

“Somehow or the other, all the science we have, we must be able to put the science in to have one lane open,” he said, noting that the only diversion between Campden Park and Rillan Hill is through Lower Questelles, where the road only allows for single-lane traffic

“Because you have to allow traffic at the bottom, one lane and traffic at the top, one lane. If not, you will be there for hours,” Francis said, and encouraged commuter to leave for work on hour earlier when the work begins.

“I am asking the people to be understanding and cooperative and the implementers … to make sure that we try to facilitate the travelling public.”

And, Ian Singh, a director at Dipcon Engineering Services Ltd., gave his company’s commitment to building a quality highway.

“We will endeavour to build a solid, first-class road that will stand the test of time,” he said, but added, “The inconvenience during the construction of this project will be substantial…

“We will be considerate and act responsible in our programming and execution. We will try our best to reduce the inconveniences but, at the same time, we have to complete the road in the quickest possible time. Although we have the right of work, a lot of the programme that we would do and execution will take into consideration the traffic flow and the commuters.”

He said the company hopes to complete the hospital drainage and shifting of the road in Questelles during the school’s summer vacation.