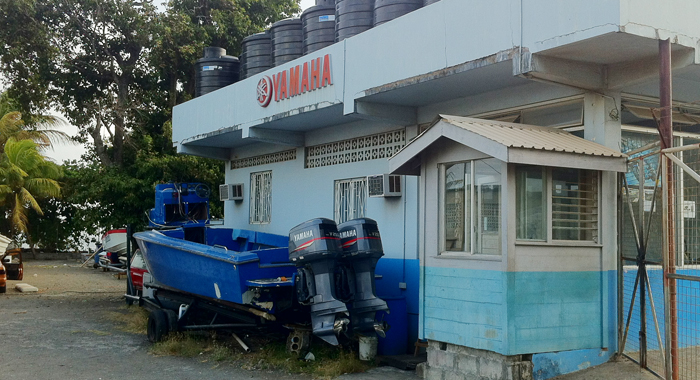 Opposition Leader Arnhim Eustace has accused the Ralph Gonsalves government of withdrawing duty-free concessions on outboard engines sold by Howard’s Marine because of a petition in the United States involving Doug Howard, brother of owner of the company, Keith Howard.

Eustace said on his radio programme this week that without the concession, fishermen will pay more for outboard engines, and therefore the price of fish might increase.

He further said that he believes that it was because of the petition that police officers from the drug squad raided Howard’s Marine last week.

Doug was among US-based Vincentians who petitioned organisers of the April 19, 2014 International Forum “Revitalizing the Reparations Movement” at Chicago State University to withdraw Gonsalves’ invitation to be the featured speaker at the event.

“His (Keith Howard) brother (Doug Howard) was very outspoken on that matter. But that is his right. There is too much coincidence in that. I believe the two things are related. We have to stop this nonsense here,” Eustace said of the developments at Howard Marine and the petition in the United States.

Drafters of the petition said it was their “considered view, backed up by the evidence of our own personal experiences, that Dr. Gonsalves is eminently unsuitable to lead this noble charge for justice for atrocities and crimes committed against people of African descent by the former slave-masters and plantation-owners of the Caribbean.

“Dr. Gonsalves is not the man you want to be a standard bearer under your banner,” the petition further stated.

Gonsalves did not attend the conference, saying his doctor ordered him to rest because he injured his ankle when he slipped in his bathroom, and a cut he had to the sole of his foot became infected.

Eustace noted that Howard’s Marine, which has been in business for over 30 years, is the main importer of outboard engines used by Vincentian fishermen.

The former prime minister and minister of finance added that the law on the value added tax exempts outboard engines.

However, Eustace said, when Keith Howard went last week Tuesday to clear engines that he had imported for fishermen, he was told that he has to pay import duty and tax because he doesn’t have concession.

“That is a concession given by governments years ago,” he said, adding that it is also included in the value added tax law. “That’s in an effort to promote agriculture and our food security and so forth…

“So when they tell him all of a sudden that you are not a concessionaire, that’s nonsense, foolishness,” Eustace said.

“If the fisherman has to pay these kind of price increases on his engine, the price of fish is going to go up.”

“These increases are not acceptable. We have fish going at $9 a pound. It will go up,” Eustace said.

He further added that development agencies would have to give larger, but fewer loans to fishermen.

“And they are telling the staff, ‘When we get anything we will tell you.’  They are supposed to have a search warrant, unless the person gives permission to come in. But that’s the kind of nonsense that is happening here. …

“Nobody is concerned about what the price is going to be to the fisherman and therefore the price of fish for all our people,” Eustace said.