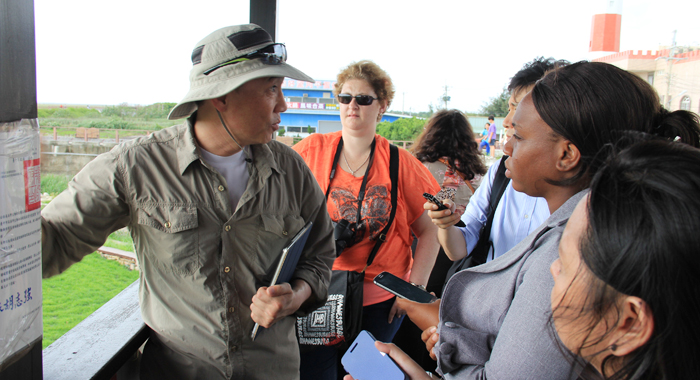 International journalists interact with a conservationist at Goamei Wetlands in central Taiwan on Wednesday. (IWN Photo)

TAIPEI, Taiwan — The government of Taiwan is exploring areas of cooperation with its allies in the Caribbean as the world battles with balancing economic development and environmental protection.

In April, Taiwan and the United States signed the International Environmental Partnership, which paves the way for Taiwan’s increased influence on the global community in the area of sustainable development.

Wei said that with the International Environment Partnership, Taiwan is considering different areas of involvement, but is not limiting the options to its diplomatic allies.

“But, basically, it will be a regional approach,” he told journalists participating in an eco-living in Taiwan media tour from May 12 to 18.

“Talking about the Caribbean, probably there are two things we are going to do, one is about e-waste,” Wei said. “I think the U.S. is very concerned about this and felt that Taiwan’s experience can be a good example or demonstration to other counties, especial countries in Central and South America and African countries.

“The other thing is about education,” Wei further said, adding that Taiwan’s environment protection laws are among the most rigidly enforced internationally.

He further said that Taiwan is also considering region-specific projects, such as the possible installation of a tsunami early warning system that will benefit countries in Southeast Asia.

Wei said international cooperation is needed in light of tensions between developed and developing countries over who have contributed the most to environment degradation, and is therefore most responsible for halting or repairing.

“… we do need mutual understanding and Taiwan can play a very interesting role. We do have that kind of experience. We have sympathy for both sides,” Wei said.

He, however, added, “I think developed countries owe something to the whole world, the whole planet. Developed countries have already enjoyed so much of the natural resources of the earth. Because of that, we face the problems of climate change, rising sea level, deforestation, and also pollution.

“So I think developed countries really have to take their responsibility. They have already, sorry to say this, taken advantage of the earth and should do something.”

Wei said that Taiwan is “in the middle”, and added, “we also have to do something to extend our helping hands in terms or our technology, probably financial [support], and experience.

“Environmental problems are crossing boundaries. … An unhealthy earth will have effects on everyone, be it developed countries or developing countries.

“So, we have to do it together, and we don’t have much time. Maybe we have the other 30 or 50 years to deal with this problem….

“In the past, the trend I have seen was to blame other people. Sometimes, we don’t think about what we should do.”

Wei said that the EPA wants to act   domestically or internationally, and allowing Taiwan some international involvement is important.

He was referring to Taiwan’s exclusion, because of the political situation with China, from several international agencies and organisations, such as the United Nations Framework Convention on Climate Change.

Speaking of Taiwan’s own experience, Wei said that the country did not pay enough attention to sustainable development.

“I think Taiwan, before the establishment of the EPA, we emphasized so much economic growth,” he said, adding, “Sustainability is the key concept”.

“Taiwan really now is paying a lot to compensate for what we did when we emphasized so much on economic growth. Once you have pollutants dispersed in many places, it takes all resources to go back to the original situation.

“So, if you have a long view, we would you regret having emphasized too much on economic growth and too little on conservation or protection. That’s the lesson I think Taiwan has learnt and many country have learnt this,” Wei said.

“You want to have good development in this generation, but you don’t want to harm or do anything detrimental to the next generation. That is the basic idea. That is a balanced view. We emphasize the so-called inter-generation justice …” he further stated.