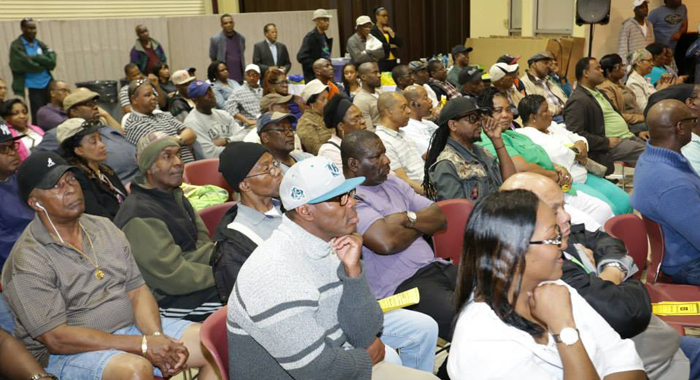 A section of the crowd at the NDPs town hall meeting in Brooklyn, New York. (Photo: NDP/Facebook)

Leader of the Opposition Arnhim Eustace has told Vincentians in New York that the Ralph Gonsalves government should do more to encourage them to invest in St. Vincent and the Grenadines (SVG).

He told a town hall meeting in Brooklyn, New York on Saturday that it is time that Kingstown view seriously its relations with the diaspora, as not simply a matter of providing consular services, but also getting the diaspora involved more specifically in the development of SVG.

Eustace lauded the contribution of Vincentians overseas to their country’s economy, and said while there are incentives for Vincentians to invest in areas such as information technology, they are not well publicised.

He said he was not speaking only about trade between SVG and the adopted home countries of Vincentians, but also about setting up enterprises and getting concessions.

He noted that 15-year tax-free concessions are available to persons interested in setting up information technology enterprises in SVG.

“I know about these things, and I know that we can provide the incentives to encourage you in the diaspora to do some investments at home. Not just send home barrel; that has its role, but I am talking about more integrated and important development to the benefit of all of us. And to the extent that our economy grows, you will be there making your contribution and more and more people will be working.”

Eustace further said that SVG can change its incentive laws if they are not satisfactory to encourage more diasporans to invest at home.

“A new NDP (New Democratic Party) administration will provide the incentives that are necessary for that purpose. I give you that commitment right now, because I know we are going to be there,” he said in reference to the outcome of the next general elections, constitutionally due in December 2015.

And while Eustace called for more incentives, he also lauded the contribution to the Vincentian economy of citizens overseas.

“I know that as Vincentians, wherever you are, you are always concerned about your country. This is evidence with the extent to which Vincentians abroad look after their families at home,” he said.

Eustace, an economist who is a former prime minister and minister of finance, said Vincentians overseas play a very important role that should not be scoffed at, and accused Prime Minister Ralph Gonsalves of doing so.

“You are Vincentians, you are concerned about your country and you have made and continue to make your contribution, and you must recognised that. Not only you, we who are living home must recognise that.”

Eustace said he is worried sometimes when he hears some of the comments made about Vincentians living abroad, adding that many persons may admire their contribution but do not want to recognise it.

The Vincentians diaspora in the United Kingdom, the United States, and Canada contribute more than EC$1 million a year to the Vincentians economy in cash and kind, Eustace said, noting that 18,000 barrels were sent to SVG last year.

“When you put values on those contributions, they are very noteworthy. And while our economy declines at the present time, you have remained there giving and giving to keep St. Vincent and the Grenadines alive,” he told the gathering.