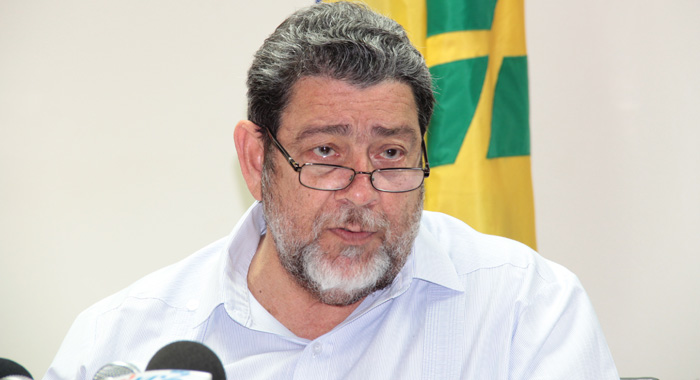 Prime Minister Ralph Gonsalves underwent a surgical procedure during his recent two-week visit to Europe, just weeks after doctors ordered him to rest because of a twisted and infected ankle.

Gonsalves, 67, made the announcement during a press conference this week, saying the procedure was to treat “a niggling pain” in an area where he had a surgical procedure in Barbados for an abscess two years ago.

“You may recall two years ago that on my way to the Middle East I developed a problem and had to seek medical attention in Barbados. And I had a small surgical procedure done.

“Well, I felt a few weeks ago a niggling pain where the procedure was done and I went to the person who did it in Barbados and he reviewed it and said to me that he understands what has happened and he’d have to do another minor procedure at the same place.”

Gonsalves said the health care professional told him that the produce was not urgent and could be done “in whatever reasonable time.

“And when I went to England, I felt the niggling sensation and I went to an appropriate specialist, who diagnosed and said basically what the doctor in Barbados — who is a good man — had said.

“And he said, ‘Would you like me to do the procedure while you are here in England?’ And I said, ‘Of course.’

“He asked me to come in on a Saturday around midday, he’ll do it and I spend the night in the hospital and come out the next morning, which is what I did.

“But I am fine, but I just want to report that particular issue,” Gonsalves said.

Before leaving for England, Gonsalves said that he would meet with investors and attend to a “personal matter”.

In April, Gonsalves sought to assure Vincentians that he is in good health, having returned to work after doctors ordered him to rest for a week because of an ankle injury.

He said he had slipped and twisted him ankle in his bathroom and that a small cut to the sole of his feet had gotten infected.

In May 2012, after his hospitalisation in Barbados, Gonsalves denied that he had suffered a heart attack and further said that he did not have prostate problems.