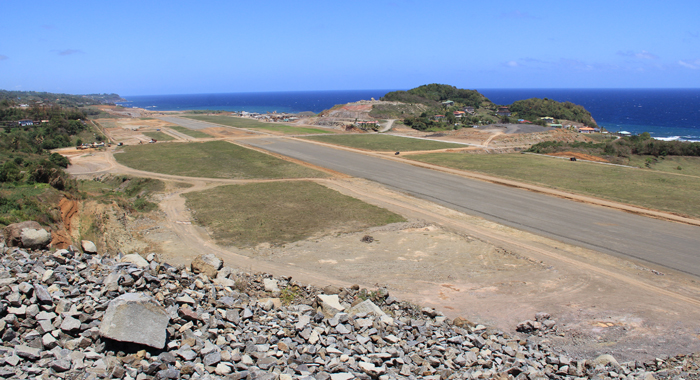 Whilst watching PM Gonsalves on TV the other day, I was surprised that he was talking about the Argyle airport runway, part of which had failed a compaction test.

He said that we have got a nice new and modern testing laboratory and we can be sure that contractors would not get away with sub-standard work.  Well I listened at the time, but only this fine Sunday morning whilst riding on the ferry to Bequia did I turn over in my mind what he had said.

Surely, either he and/or the ULP are the contractors, or is “Saint Vincent and the Grenadines” government the contractors? There are certainly no outside contractors, the Cubans are only working for wages, if what we have been led to believe is true, and it’s not another fabrication.

A contractor would have a contract but, according to other things we have been told, there are no contracts — just agreements between friends; a nod here and a wink there.

And in the case of Gonsalves, I believe a nod is as good as a wink when dealing with his socialist friends on a scientific socialist basis.

Was it not also because we had no contract with the Venezuelans that they could promise to pay the Cubans wages and then decide not to pay them?

Is this a satisfactory way to conduct a $700 million project? Must we play this Marxist solidarity game because he wants to?

It crossed my mind to say it’s laughable or almost laughable even.  But it’s not, it’s cryable, it’s our money that is being wasted and it’s the Cubans’ fault.  Remember Castro once said “the capitalists know how to earn it  and we the Marxists know how to spend it for them”?

Remember when the Honourable Arnhim Eustace asked Gonsalves in Parliament about contracts, he was told “You expect me to show you my deeds”, and refused to give the information?

Then you have all the trucks and machinery at the airport with bumper and screen stickers “I AM LABOUR”. The project named after Che Guevara, that nasty communist who murdered hundreds if not thousands of Cubans by summary execution, where he personally pulled the trigger that sent a bullet crashing through the heads of the recipients. Che Guevara is a mass murderer, not a hero.

Now to cap it all, a part of the runway was not compacted properly. It should have been laid, 12 to 18 inches then compaction, then another and compaction, and so forth. There is no way that it can now be rolled to achieve the compaction required. It must either all be dug up or a special compaction machine brought in at great expense and the loss of many, many months of time. The runway, taxiways, and parking apron must pass a test of at least a 100 per cent compaction.  Every inch of the rest of the site must have a compaction between 90 and 92 per cent.

Further, sewages and wastewater from the terminal will have to be pumped somewhere.

I had hoped they would have made special provision for the wastewater, rain water from the apron and aircraft parking areas.

The water from these areas will be highly polluted with oils, fuel residues from engine exhaust, tyre rubber pollutants, and hydraulic fluids, to name but a few. Some of these pollutants may contain heavy metals like lead and mercury, which if they get into the food chain, will cause serious damage to humans.

I inspected the site and drainage system does not provide for storage and safe disposal of these fluids and waters.

If this gets into the Yambou river, because the way the sea tides run, this will cause serious damage to reefs between the airport and Kingstown and on, even as far away as Bequia.  It will also kill sea plant life and fish, contaminating lobster and fish and rendering it unfit for human, and even animal consumption.

The fluids should be collected and held and processed in separator traps and the pollutants’ separated from the water before discharge.

There will also be a serious pollutant reaction to marine life if chemicals are used to control weeds on the site.

The wonderful hard working, devoted Vincentian fishermen may be looking at a bleak future as their fishing grounds are destroyed. The first part of the marine destruction will be the elimination of the tr-tri and bait fish and reefs.

The golf course at Canouan has caused significant damage to the island’s reef, because chemical run off from the golf course. No one is commenting about that, it’s an international disgrace.

It would be much respected if the only real local expert in these matters now, Marlon Mills, would give us some input. Please Marlon can you comment?

Lastly, the owners of land that the airport is being built on still haven’t been paid.  About 60 landowners had their land taken and have been left to rot and die penniless.  Some have waited seven years. It will take a change of government to ensure these people get paid, and even then they will not be entitled to interest on their money.

Perhaps if the million US dollars in cash that was hawked around Kingstown in an old bag was put to a better use, some of these people would have got paid.

What I expect now is a new set of results to be presented that say the compaction is OK, and for the airport to be built. It’s what’s called the Maurice Bishop method and procedure.