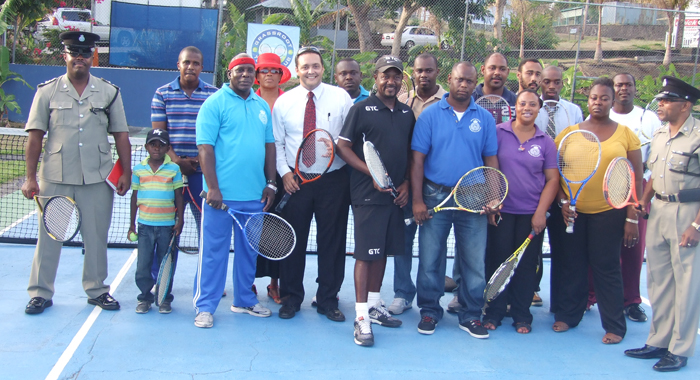 Commissioner of Police, Mr.Michael Charles, along with police coordinators, who will be taking part in the six-week programme.

The Royal St. Vincent and the Grenadines Police Force in partnership with the Grassroot Tennis Club (GTC) has launched a tennis programme, which the organizations hope will serve as the newest anti-crime strategy here.

Under the programme, police officers will be trained in the basics of tennis three days per week for six weeks. It is anticipated that the police officers, who are coordinators in the various Police Youth Clubs across the country, on completion of the programme will serve as coaches in their communities.

Connell said under the new partnership, the Club will rehabilitate four tennis courts across the country and will equip police officers with balls, rackets, and baskets.

Police chief Charles said the new initiative will serve to keep the nation’s youth on the right track. He said over 1,000 members of the Police Youth Clubs, which are mainly children, are expected to benefit directly from the programme.

Charles encouraged the coordinators to put their all into the programme.