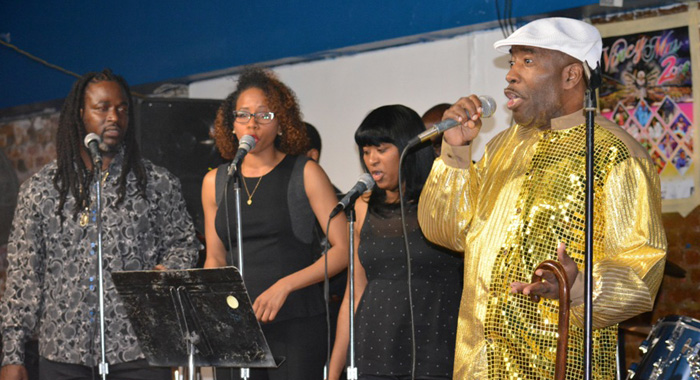 (Scroll for link to more photos)

Twelve calypsonians vied for a place in the semi-finals of the National Calypso Monarch Competition, to be held in Kingstown on June 27.

They cast at Saturday’s show and their songs were: Delano “Detector” Joseph — “Prove Them Wrong” Vincent “Groovy D” Kennedy — “You Never Know”

The performances were judged by Earl Paynter, Eustace Maloney, and Aubrey Gould, who travelled from St. Vincent and the Grenadines to New York for the event.

In addition to the judged performances, remarks were delivered by Ainsley Primus, President of the Dynamite Calypso Tent, Minister of Culture Cecil McKie, and Ann Miller, president of the St. Vincent and the Grenadines Calypso Association.

The fans were also entertained by guest artistes Winston Soso, Scorcher, and Tropicana.

Adding to the ambience of the event were MCs Hailes Castello and Bennett Straker, along with DJ Supa Eyes.

Ainsley Primus, President of the Dynamite Calypso Tent was in high spirits after the show.

“The show was a big success. Every year this show keeps getting better. I want to thank the fans in New York who really came out in their numbers to support the Dynamite Calypso Tent,” he said.