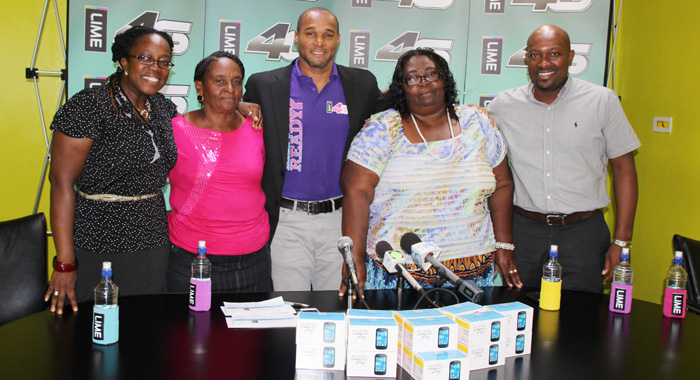 Telecommunications provider LIME fulfilled a promise to two farmers groups last year when it presented members of the Grand Sable and WALCO farming cooperatives groups with smart phones and cash on Wednesday.

During one of LIME’s town hall meetings in Georgetown last October, manager Leslie Jack promised some female farmers who were struggling with the diversification process, that he would assist them in their poultry and root crop industries.

On Wednesday at the LIME conference room in Kingstown, Jack made good on the promise, handing over cheques and 4G enabled handsets, which he said would be of support to the ladies whom he said inspired him.

“What was inspirational is that the ladies have decided to form groups of their own to diversify from the challenging crops that they were growing … And I would encourage young people out there to emulate what these ladies are doing to help themselves,” Jack said.

“They indicated that they needed some support but they were not waiting on anybody … They were going out there and making an effort to support themselves while still saying ‘I still could use some support.’”

Jack pointed out that giving cash was one way of assisting the farmers, but insisted that adding technology to the mix would help their industries become more sustainable.

With their 4G enabled handsets, the farmers would be able to communicate within their circle for free, and communicated with thier customers and clients.

“Today is really just the beginning of what I expect is great things to happen, because at the end of the day, our objective is to enhance lives and to see how best that we can grow this business and to ensure that we satisfy the general customers that we provide service for,” Jack noted.

On hand to witness the presentation was Minister of Agriculture Saboto Caesar, who stated that the gesture was a very important one, and applauded LIME for the marrying of agriculture and technology, for the benefit of farmers.

Caesar thanked LIME for reaching out to the women, whom he said he believed would make the best use of the support given to them.

He further said that the ministry would play its part in ensuring that the groups receive any further assistance needed to keep their industries going.

“It is the policy of the Ministry of Agriculture this year, to seek to enhance and to bolster the support given to corporatives, because it is very difficult for the farmers to do it alone in the very challenging circumstances that we have today.

“With these handsets and with the special programme that LIME is putting in place, what LIME is actually doing is that it is ensuring that the farming communities are linked.”

The minister said the approach by LIME a practical, down to earth and grassroots approach to assist the farmers of St Vincent and the Grenadines.

Speaking on behalf of the cooperatives, Nioka Abbott Balcombe and Cordelia Scott, thanked Jack and his staff for the support, and indicated that the monetary contributions and handsets would be used to the best of their abilities.

They added that the local farmers have taken a beating over the past years, but hope that things will continue to turn around with the contribution from LIME.

2 replies on “LIME donates cash and phones to farmers’ cooperatives”