ULP is not a real Labour Party 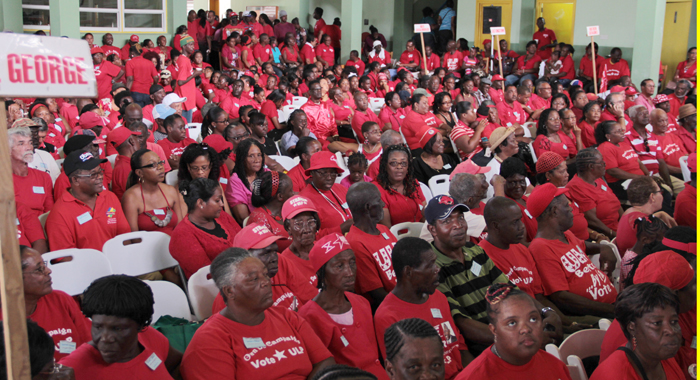 Supporters of the Unity Labour Party at the convention in February 2014. (IWN photo)

Much of the time under the Unity Labour Party (ULP) government in St. Vincent and the Grenadines, it seems to me there is little or no difference between unions,  public service, public servants, the judiciary, politics, the ULP and government. Although the   different concepts are supposed to be separated, they are not.  Under the present regime, the ULP and its membership are the government, not the elected members. Remember the ULP’s war cry “OWN THE JOBS”, “OWN THE GOVERNMENT”?

Some may argue that its far worse than that, that the government is in fact now a family affair — three family members in Parliament with only one of them being an elected member. The rest of the ULP MPs and senators are shunted about at each election time to ensure they do not get the taste of power and become a threat to the family leadership.

Vincentians may support their elected representatives, and some passionately approve of their hopes and rhetoric, most of which is a repeat of the hierarchy manufactured wordline, the approved party line, much proven to be based on untruths and innuendos.

Why do so many of today’s politicians have a bad reputation when their job descriptions seem so noble and self-sacrificing? They are even described as “honourable”, when in actual fact many are far from that.  Perhaps the answer is a little complicated, even too complicated for some followers to conceive.

One of the problems is that the Unity Labour Party is not a real Labour Party; it’s not the Labour Party that our old folk, mothers, fathers and families supported and voted for. It is the remnants of a would-be revolutionary Marxist party, that joined with old Labour and then hijacked the party, keeping the name Labour in their title, because if it was called the Unity Communist Party they would of been unelectable forever.

Peter Binose, self-appointed keeper of the bugle.
(Chucked the whistle away, not loud enough)

6 replies on “ULP is not a real Labour Party”