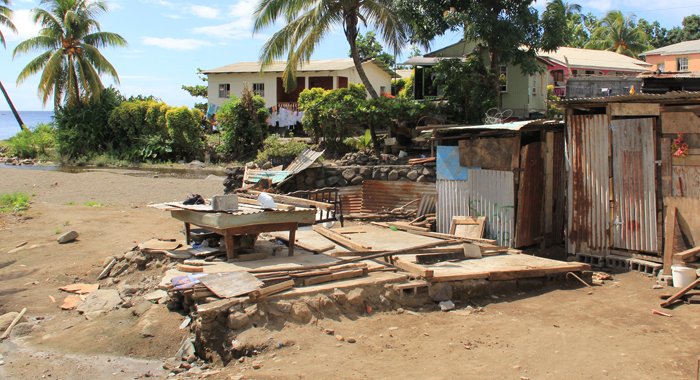 This bed and mattress and pieces of a concrete foundation are all that is left of Florestine Spring’ house. (IWN Photo)

Fitz Hughes disaster victim Florestine Spring has denied telling assessors that she wants a house reconstructed at the spot where her house was washed away in the Christmas Eve trough system.

“My name was on the list for relocation,” Spring, a 39-year-old unemployed mother of six, told I-Witness News on Friday, adding that the land belongs to her mother, who has not given permission for a house to be rebuilt there.

For the past four months, Spring, her boyfriend, four of her children, and a grandchild, have been living in a building in Fitz Hughes that previously housed a village shop.

The building has not electricity or water connection.

The government says it will reconstruct a house for Spring and her family — who did not receive one of the 12 houses in her community handed over to mainly disaster victims earlier this month.

“I want to say to those persons who are going to have their houses rebuilt on site, don’t get too anxious,” Prime Minister Ralph Gonsalves said in Cumberland on Thursday, where 15 houses were handed over to disaster victims.

“The building train of HLDC (Housing and Land Development Corporation) is coming to build those onsite. Don’t worry,” he further said.

MP for North Leeward Roland “Patel” Matthews, an opposition lawmaker, highlighted spring’s situation on radio last week.He said she did not receive a house because she is a supporter of the New Democratic Party.

Spring told I-Witness News last week that officials from the National Emergency Management Organisation (NEMO) had told her that she has to relocate because of the closeness of the river.

She also expressed feared that if a house is rebuilt at the location, it will be in danger of washing away again when hyro-electricity generation recommences at the nearby power plant and when the rains return.

But while Gonsalves said Spring told the assessor that she wanted a house rebuilt at the same location, she told I-Witness News on Friday that she never said that and that NEMO head, Howie Prince, had told her from the inception that she has to be relocated.

Spring said that Prince visited her on Monday and said a house can be rebuilt at the same location, if Spring so desires.

Gonsalves, speaking at Cumberland, suggested that Spring has two options.

“But if she want it now, and if she hearing me, just come up by me and I will give the instruction to build the two-bedroom board house. It would be better than what she has — with a wall floor and toilet and bath in it, with current (electricity), with the wiring done,” Gonsalves said.

“But if the woman, this comrade sister, want to wait, we will build a two-[bed]room wall house for she right where she has her house,” Gonsalves further stated.

But Spring questioned how a concrete house is to be constructed on land that she does not own, and at a location that NEMO has said is not suitable for a house.

Gonsalves further accused Matthews of politicising the issue when he first raised it on radio.

He said he told the lawmaker during a conversation on the sidelines of Parliament on Wednesday.

Meanwhile Minister of Housing Montgomery Daniel also commented on the issue at the ceremony on Thursday.

“I want to say to her, that the information that is before me is that her house is down for reconstruction on site, so I am sure very soon, she will be relieved of her stress,” Daniel said.