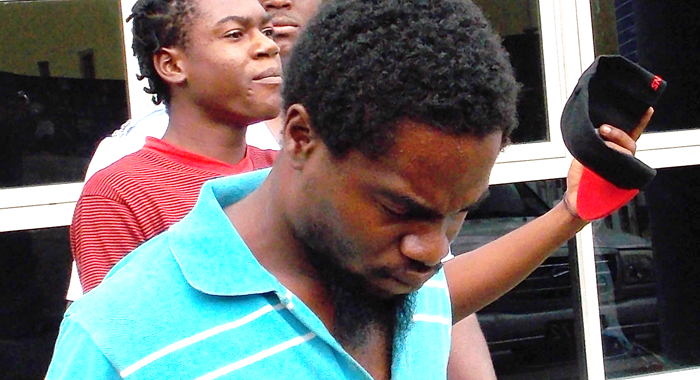 St. Lucian, Thaddeus Cox, forefront, is on a number of drugs and gun charges.

An early-morning raid by the Rapid Response Unit (RRU), commonly called the “Black Squad” because of their black uniforms — in the McKie Mountains at Richmond on Sunday resulted in the arrest of a St. Lucian and the seizure of 192,496 grammes (424 pounds) of marijuana, 2 semiautomatic pistols and a double barrel 12 gauge shotgun.

According to information received, the patrol unit from the RRU, led by corporal Dallaway was in the mountain around 7:10 a.m. when they observed the St. Lucian, Thaddeus Cox, emerge from a hut.

When Cox looked in the direction of the law officers he began to run. He was pursued, caught and taken back to the hut. The hut was searched and the law officers found 10 nylon sacks containing 30 taped packages of the controlled drug. They also found the shotgun on a bunk and the two semiautomatic pistols under a pillow on the bunk.

The St Lucian was taken before the Kingstown Magistrate Court on Monday, charged with possessing 192,496 grammes of marijuana, possessing the shotgun and one charge each of possessing the pistols.

He initially pleaded guilty and then minutes later changed his plea.

Cox has been remanded into custody pending a trial.

The matter has been transferred to the Serious Offences Court and he is scheduled to appear there on July 9.

Cox told police he came to St. Vincent one month ago and was staying with someone called “Brigo.”