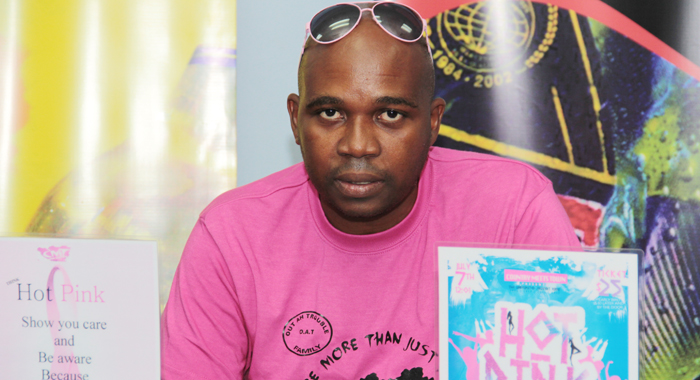 Band co-founder Carlos James said at a Coreas Hazells Inc. press conference this week that the band, which was founded in 2009 and has been the champions of the J’ouvert Painted Band category for Vincy Mas since then, is different in that every year it ensures that an educational component is included in its marketing campaigns so as to maintain its motto “We are more than just a band; we educate while we entertain”.

And, this year, CMT, while defending its J’Ouvert domination, with its presentation “HOT PINK”, will twin the revelry with a campaign dubbed “Think! Hot Pink, show you care and be aware because early detection saves lives”.

James said that CMT in association with the SVG Cancer Society is promoting Cancer awareness under the slogan.

The band will ask carnival goers to buy a pink glove for EC$2 in support of the Pink Glove Wave, and all proceeds will be donated to the SVG Cancer Society.

Meanwhile, Esworth “Ezzie” Roberts, marketing manager at Coreas Hazells Inc., said his company is please to be a sponsor of CMT, which is one of the bands and other components of Vincy Mas that his company is sponsoring this year.

Roberts said CMT is well-known in SVG for its hard work and strong marketing.

“Coreas Hazells Inc. was a sponsor of their 2013 production and we have agreed to repeat our sponsorship through the Stag brand,” he said.

Coreas Hazells Inc. is also a sponsor of the Heineken Mustique Green Machine t-shirt band, which in 2008 helped to revive Monday T-shirt bands, a unique element of Vincy Mas.

The company is also supporting The Network SVG, the Green Machine’s main rival.

“We at Coreas Hazels Inc. are confident that The Network will deliver another carnival Monday T-shirt band of excellence and we stand firm behind this band with various products from Carib Brewery Ltd.,” Roberts said.

Among other recipients of sponsorship from Coreas Hazells Inc. are Tribes Mas Band, the “In The Heat Of The Night” section of Digicel Bloc mas band, SVG Players International, H20 and Dirty Sexy Soca.

Coreas Hazells Inc. donated a car to the winner of the Soca Monarch and Calypso Monarch competitions in 2013.